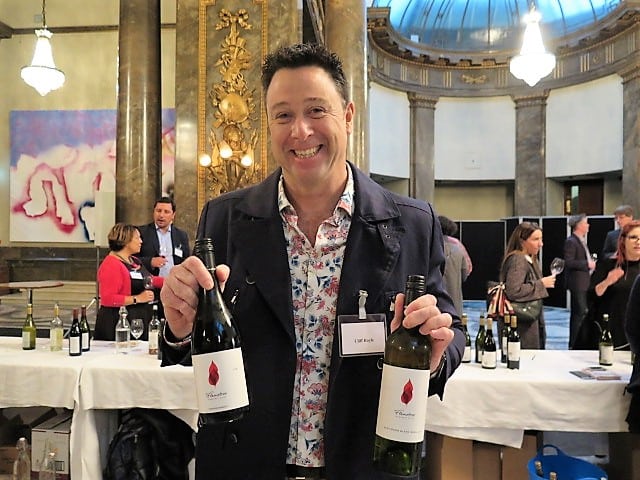 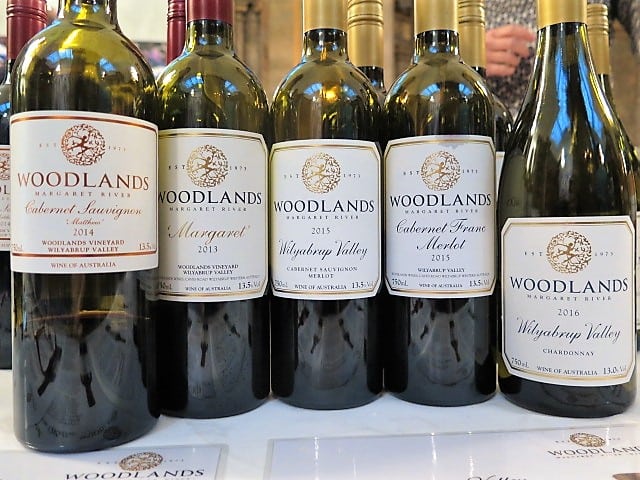 My New Year kicks off with something of a Western Australian focus.  I’ll be presenting three Chardonnay and Cabernet-focused 50th Anniversary Margaret River Masterclasses at the London, Edinburgh and Dublin Australia Day Tastings, before hot-footing it to Australia itself for Riesling Down Under.  Formerly known as the Frankland Estate International Riesling Tasting, the Great Southern estate launched this biennial celebration of top notch Rieslings from around the world in 2001.  It’s as good a prompt as any to get around to writing up last October’s Annual Western Australia Tasting, where I was struck by the value for money of entry level and mid-tier class in a glass wines.

And to remind myself of a reliable thorn in the side – broken New Year Resolutions, such as writing up tastings sooner….  Here is the original opening paragraph of this post! Thirty-three wineries showed over 100 wines at the Annual Western Australia Tasting last week, which is hosted by WAGO.   It’s a great chance to catch up with this premium-focused State’s wines.  Woodlands’ very fine renditions of Bordeaux blends lingered long afterwards, as did this question.  Why on earth is no-one importing them into the UK?  I review these Margaret River beauts together with my other highlights from the tasting below. To which, switching back to 2018, I would add Andrew Watson of Woodlands will be at the London Australia Day Tasting to show his family’s wines – click here for details of winemakers attending ADT this year. 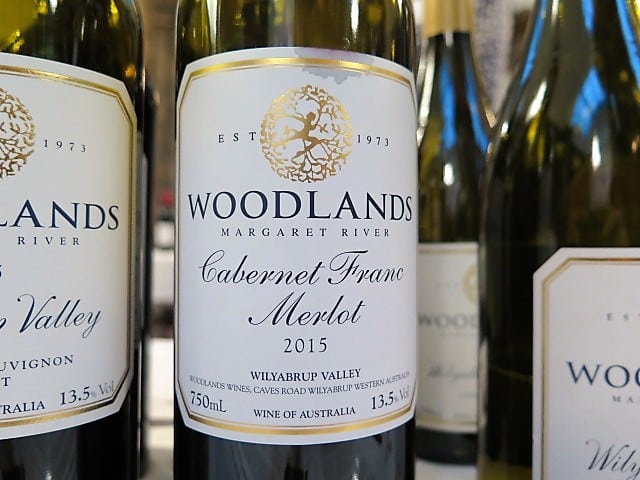 Presented alphabetically, Woodlands and Xanadu may have brought up the rear of this tasting, but they feature among the top players in my Best of the West hit list.  You can read up on Xanadu’s latest releases and some museum releases in this report of a Xanadu vertical tasting, ditto Cullen Wines & Vasse Felix.  As for Woodlands, I’ve enjoyed some terrific visits with the Watsons who, in 1973, planted one of the region’s earliest modern vineyards in the heart of Wilyabrup.  I especially remember tasting the glorious Woodlands Cabernet Franc 2005.  As in Bordeaux, the other Cabernet is very much a bit part player in Margaret River if it features at all.  The Watsons planted the grape in 1975/76 and these old vines can produce stunningly perfumed wines, so I was thrilled to see it playing lead role in Woodlands Cabernet Franc Merlot 2015 (Margaret River).  Sure enough, this blend of 52% Cabernet Franc, 43% Merlot, and 5% Malbec had gorgeous lift – fragrant star anise – to its sappy red and black berry, cherry and currant fruit.  Aged for just 10 months maturing in one, two and three year old French barrels, the fruit and fragrance really fly.  Fresh and lingering, with fine polished tannins, as was Woodlands Cabernet Sauvignon Merlot 2015 (Margaret River), which showcased the Merlot’s fruitier, sweet blueberry perfume and the Cabernet Sauvignon’s grainier tannins well. 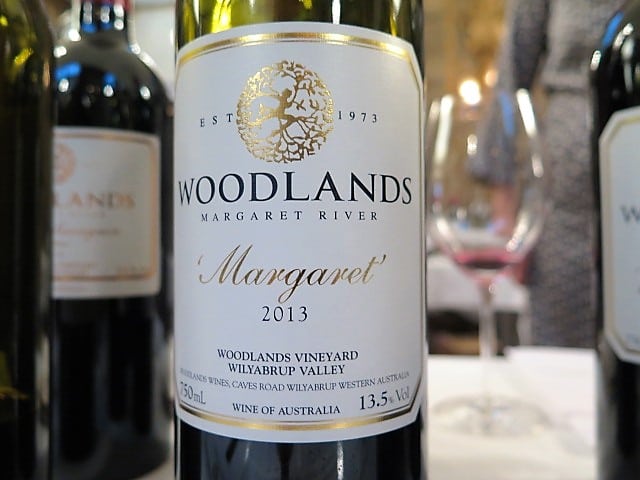 Stepping up the concentration, extract and new oak, Woodland’s upper tier Cabernet Sauvignon-focused reds strike a more traditional note than say Cullen, Vasse Felix or Xanadu.  These are plush wines, which showcase winemaker Stuart Watson’s love of the textural and savoury.  Woodlands Margaret 2013 (Margaret River) features ­­78% Cabernet Sauvignon, 11% Merlot and 11% Malbec in 2013.  Following fermentation, the Cabernet Sauvignon remained on skins for 34 days and this wine was aged in French oak (50% new) for 18 months, producing a textural wine with savoury layers of spice and tapenade to its velvety black fruits. Weighty but balanced, it has exemplary tannin structure 13.5%.  Ratcheting up the Cabernet again, Woodlands Matthew Cabernet Sauvignon 2014 (Margaret River) features 94% Cabernet Sauvignon, 4% Malbec and 2% Cabernet Franc.   Aged in new French oak for 19 months, pencil shavings and cedar spice make for a perfumed nose and palate, yet Matthew is firmer, less broachable than the others – one to cellar, to allow its depths to be fully mined.   A sumptuous core of leesy, fleshy black currant and berry and contrapuntal sappy, savoury riptides well supported by ripe but powerful tannins point to a long future ahead.

I enjoyed catching up with Cliff Royale, whom I first met at Voyager Estate and visited shortly after he joined Flametree in 2009.  Royale always had a particular passion for Chardonnay and, sure enough, his interest shone through in Flametree Chardonnay 2016 (Margaret River) and, I gather, Flametree’s flagship SRS Wallcliffe Chardonnay 2016 which I’ll be showing in the ADT masterclasses. Just like at Voyager Estate, Flametree’s Chardonnay includes Gin Gin clone derived from Leeuwin Estate block 20 cuttings. Royale told me it features clone 95 Chardonnay too and is blended from three southern Margaret River vineyards two from the Wallcliffe subregion, one from Karridale.  These days, Royale favours natural ferments and high turbidity to bring texture and complexity as opposed to malo and batonnage (neither of which he practises, though this wine is aged on lees in French oak puncheons and barriques, 20% new, for 10 months).  It reveals signature Gin Gin perfumed but intense dried pear and grapefruit and has good fruit power and freshness both, with a salty, funkier, textural streak.  Very good. 12.8%

As for Leeuwin Estate Prelude Vineyards Chardonnay 2014 (Margaret River), it is a classic offering from this estate – concentrated, oaky (but balanced given the concentration) with impressive structure and precision.  The best is yet to come – a couple of year’s bottle age will reward the drinker.  Another classic, Pierro Chardonnay 2014 (Margaret River) retains its plush, layered, oakier style, with cedar, bay leaf,  toast and custard cream (vanilla) accents to its ripe lemony and white peach fruit.   Lovely concentration, length and layer. 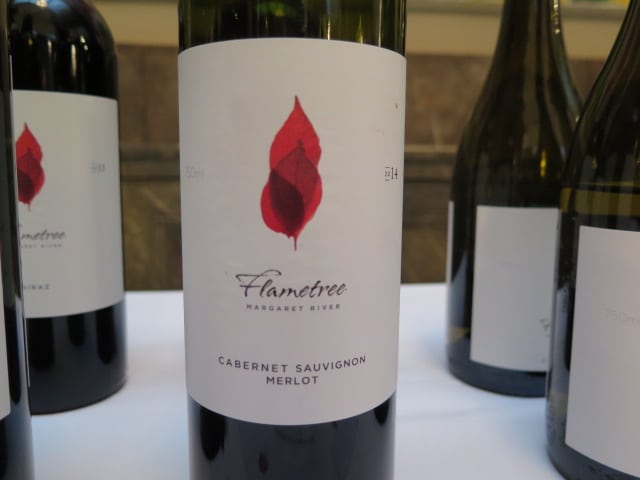 Royale hasn’t lost his touch on reds either.  With an RRP of £21.99 I thought Flametree Cabernet Sauvignon Merlot 2014 (Margaret River) was a nice buy with its bay leaf nuanced lingering black berry and currant fruit, fine, striated tannins and lingering, dry (flavour profile), fresh finish.  Also impressing around the £20 quid price point and worth checking out are Amelia Park Cabernet Merlot 2014 (Margaret River) which has cedar-edged juicy blueberry and blackcurrant fruit, fine tannins and nice length/dryness of profile.  Hay Shed Hill Cabernet Sauvignon 2014 (Margaret River) and Hay Shed Hill Chardonnay 2016 (Margaret River) are made in a leaner but well executed style, the Cabernet a touch leafy, the Chardonnay firm and focused but with lovely back palate smoky, gravelly minerality. 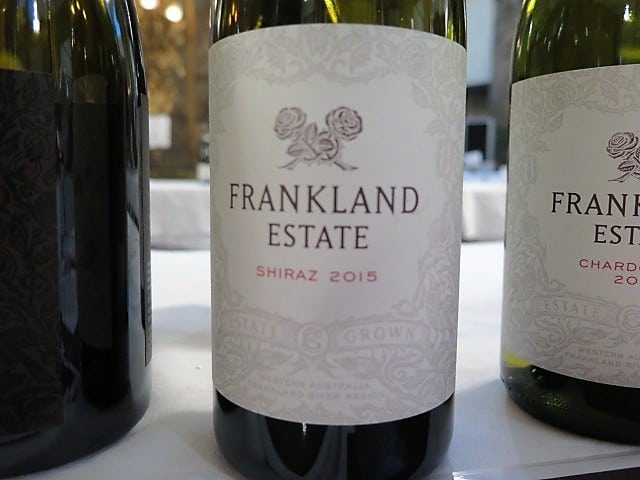 Naturally, I have super high expectations of Frankland Estate’s Rieslings.  Since I first encountered these leading Great Southern Rieslings they have become more texturally complex (thanks to lees ageing) with no loss of freshness or line – the junior example in the range was no exception.  Frankland Estate Riesling 2016 (Frankland River) is talcy in perfume and texture, with lovely intensity of lychee and lime fruit and a hint of rosewater.  Dry, long and persistent.  Very good.  £17.50 at BBR.  Also from Frankland River, the clue is in the name for Plan B! OD Riesling 2016 (Frankland River).  This dangerously gluggable off dry Riesling (24g/l residual sugar) has deliciously inter-mingled lime, lime blossom and petrol.   11.6% abv.  Great Southern neighbour Harewood Estate fielded a great example of Mount Barker Riesling, as did Geographe-based Capel Vale.  Harewood Estate Mount Barker Riesling 2017 (Mount Barker) showed lovely purity of grapefruit and snappy but sweet (as in ripe, not residual) apple with talcy florals.  Good drive and length.  Pinot Noirs from this estate impress too.  Capel Vale Regional Series Riesling 2014 (Mount Barker) has zesty lime with powder puff perfume/minerality and nice line and length.  11.5%

Like the Riesling, Frankland Estate Shiraz 2015 (Frankland River) is aged on lees – gross lees whilst in (500l) barrel (14- 18 months) which, winemaker Hunter Smith told me, means the wines can be “quite shy and insular for a couple of years but remain lively longer.”  The 2015 is perhaps the finest Shiraz I’ve tasted from Frankland Estate.  Gravelly and peppery with a hint of orange peel to perfumed nose and palate (it features 3% Viognier), it has dynamic, fresh tannins and berry fruit – red and black.  A hint of coffee rock (oak?) to the finish does not detract from its dry profile.  Very good indeed.  Lively is the word 14% £17.50 at BBR 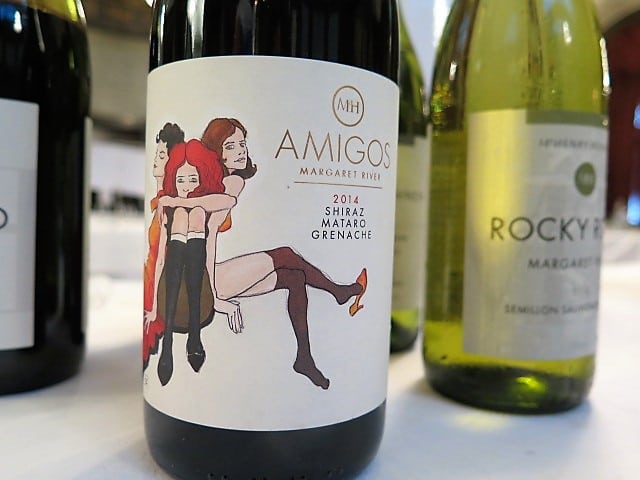 If you don’t associate Shiraz, let alone GSMs, with Margaret River, what about Plan B! “Free Range Wines.”  Terry Chellappah (pictured below) throws a Sangiovese spanner in the works (or not) and even has the temerity to prefer Geographe (Ferguson Valley) Cabernet Sauvignon over Margaret River Cab….  The Sangiovese in Plan B! GT Cabernet Sauvignon Sangiovese 2015 (Western Australia) lends a savoury dimension (hints of tea and leather) plus a lively sour cherry twist to the Cabernet.  Good intensity with a lift of violets in the tail.  Different, but in a good way.  Plan B! ST Shiraz Tempranillo 2015 (Western Australia) brings an Iberian touch to the Frankland River Shiraz and, very much in tune with Plan B!’s style, is high on drinkability with interest.  Lovely pepperiness to its medium-bodied plum fruit. 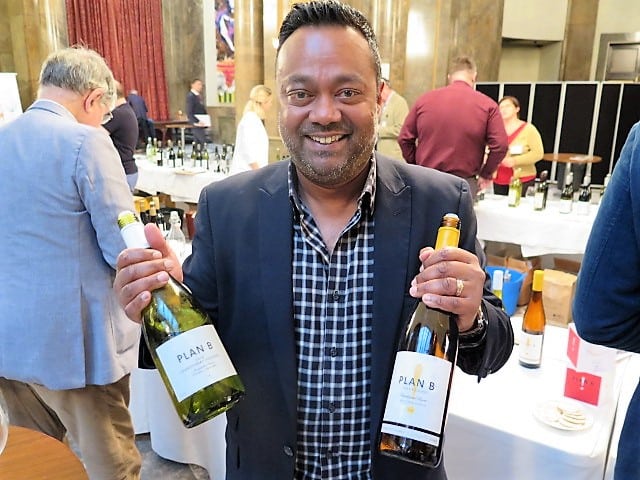 Mazza go the whole hog (porco/cerdo), focusing solely on Iberian varieties, Portuguese and Spanish.  My standouts were Mazza Touriga [Nacional] 2014 (Geographe), with its bergamot- edged fresh and juicy blood plum fruit and contrasting earthiness, the drier, meatier, spicier Mazza Graciano 2014 (Geographe) with its lifted orange peel and pepper accents and Mazza Bastardo Fortified 2017 (Geographe) – a good effort with raisins and fruit cake oomph.  Both 2014 reds saw around 10% whole bunch, 10 days on skins and 9 months in old French oak 225l barrels.  The fortified was part whole bunch ferment (40%).  The ferment was stopped after 3 days with a residual 4 baume.  It then spent a day on skins post fortification before being aged for 6 months in old French (225L) and American (300L) oak barrels. 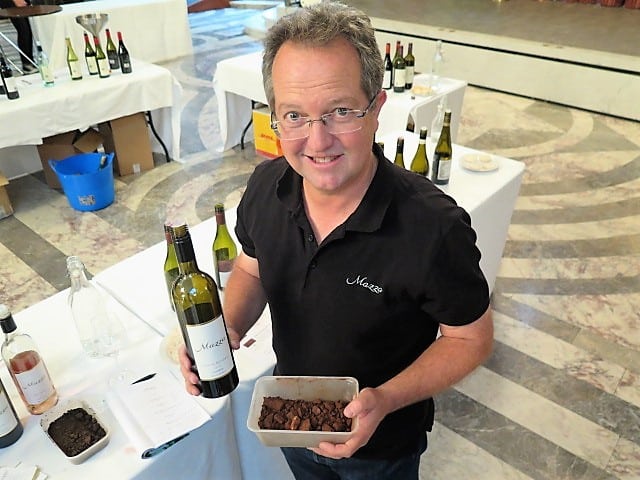