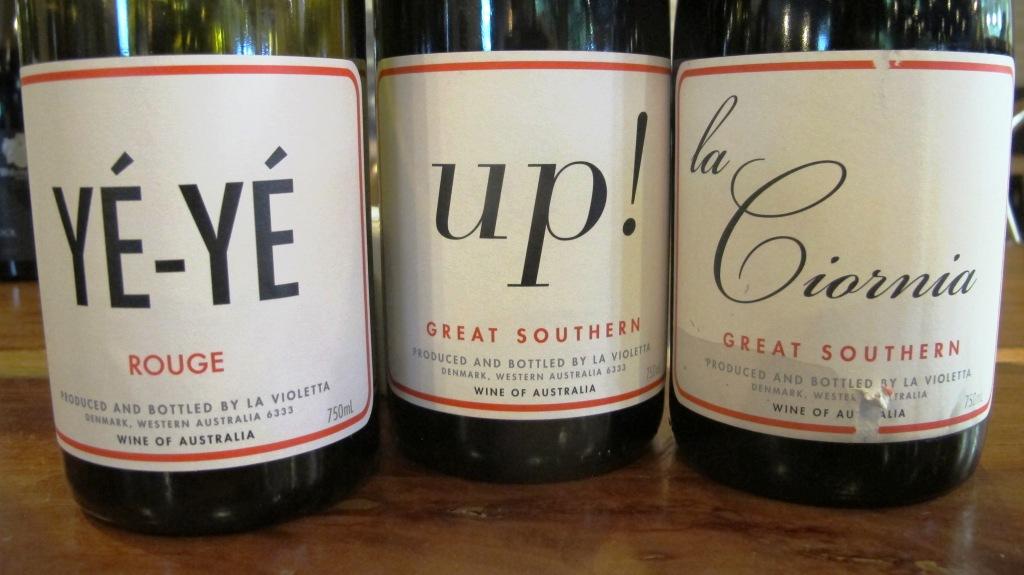 My watershed moment with Western Australian Shiraz came courtesy of La Violetta La Ciornia 2008 back in 2010.  A wine which showed cool climate lift, elegance and interest in spades.  I’ve been keen to visit La Violetta/winemaker Andrew Hoadley ever since and my July trip revealed that he’s no one trick pony.  Indeed his wines were the stand out of my Great Southern visit (against some pretty stiff competition I might add) and in the case of his positively kooky Sauvignon Blanc, against my better judgment!

Hoadley strikes me as such a feeling, instinctive winemaker that it surprised me to discover back in 2010 when we first met in London that he was raised in Queensland by tee-totalling presbytarians.  Suffice to say during his youth he wasn’t really conscious of wine.

His watershed moment came when he went travelling and shared a taxi to the Great Wall of China with a French winemaker.  When he subsequently “popped in” to see her in France back in 1991 Hoadley ended up following the grape picking trail from Beaujolais to Montrachet.  Apart from a dabble with cheese-making, he slowly worked his way into wine via pruning jobs and a viticultural apprenticeship.  As Hoadley puts it “it seemed logical to understand the vineyards.” 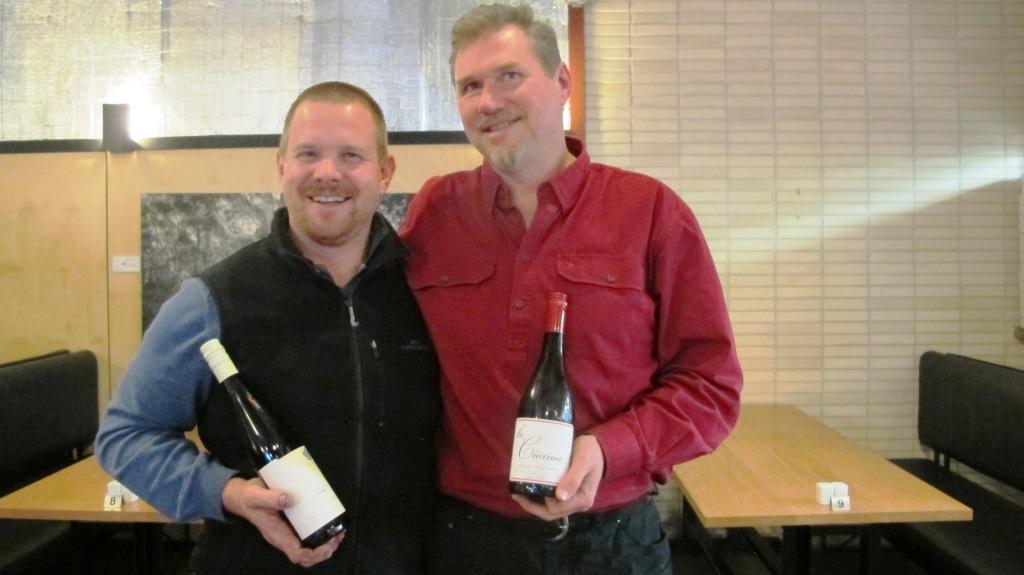 As for winemaking his Australian c.v. covers stints in Mildura, Canberra, Tasmania, Orange,  Strathbogie Ranges and the Riverland. In 2008 Hoadley headed west to Great Southern’s cooler climes to work for Castelli Wines (whom he left this year) which is also when he started to make his own wines.  So La Violetta La Ciornia 2008 was quite some debut!

It was while working for BRL Hardy in Canberra that Hoadley met “Barolo-head” Alex McKay (now of Collector Wines) whose regular tastings broadened his outlook about wine.  It wasn’t long before he had bagged himself a job in Barbaresco, Piedmont where he worked a few vintages.  Describing it as “a place to recharge” Hoadley discovered that Dolcetto, supposedly “a lesser wine” [than Barolo or Barbaresco], could be the perfect wine for an occasion.  Something which, he says, was not so well understood in Australia.

For Hoadley “different quirky varieties all have something to tell us” – tales which he has pursued elsewhere in Italy, working in Abruzzo with Montepulciano and Campania with Fiano and Falanghina.  And now in Great Southern where his playfully eclectic range has grown since we last met. 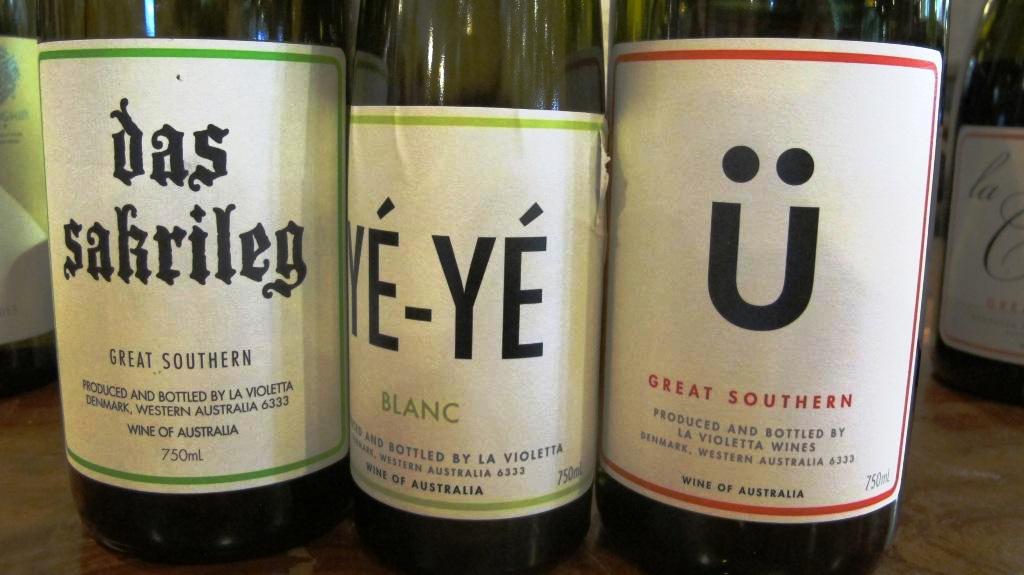 I didn’t discuss it with Hoadley but the name is, I guess, a reference to the winemaking which drives a coach and horses through the traditionally hyper-protective Australian approach to making Riesling.  Said sacrilegious approach involves 6 hours’ pre-fermentation skin contact, oxidative handling, a wild ferment, several months ageing on lies in barrel (4-5 year old French oak puncheons and a couple of barriques) and bottling the Riesling unfined and unfiltered. A perfectly sinful list! Has this man been to confession?  No need, I think, because it’s a lovely wine (and one which Hoadley has been making since 2008).  In this vintage, fruit was sourced from the Zapatista Vineyard.  Its sweet apple (think apple sauce) fruit seemingly shimmers with mica crystals – a dancing minerality; there’s an exotic musky lift too (I later discover related not only to the skin contact but also a splash of Gewurtraminer, c 1-2%).  Lift, layer and length define this Riesling (which I was surprised to learn is dry and not off dry – it sheer fruit purity, intensity and natural sweetness suggest otherwise). For Hoadley you need the fruit intensity to survive the juice oxidation and das sakrileg has beautiful balance and texture.  13%

I reckon Yé-Yé is a pre-emptive strike to curb the naysayers who reckon Riesling, Viognier and Gewurtztraminer do not good bedfellows make.  I suppose you might say it has something of an Alsace Edelzwicker about it.  Referring to the leaness and freshness of Great Southern Riesling Hoadley explains, “I’m trying to find varieties that interact together and the Riesling needed some structural enrichment – blending for a textural element early on.”  And that’s despite the fact that 35% of the Riesling (which comprises 95% of the blend) undergoes skin contact and is barrel fermented, as is the Viognier (4%) which comes from Frankland River, Great Southern.  There are only two Gewurtztraminer vineyards in Great Southern but you don’t need a lot – just 1% is enough to give a spicy backdrop to this attractive wine’s fleshy pear and lychee fruit. Spice and earth notes also betray the skin contact, here used to judiciously attractive complexing/textural effect (with help from the addition of ”friesling” – frozen Riesling must – to adjust the residual sugar).  Stone in a pond acidity ripples gently across the palate and, big picture, there’s no obvious varietal pull.  Which makes it an oxymoronic seamless yet textural wine! Varietally seamless that is and textural in terms of its shapely mouthfeel and ever so gentle rasp of tannin.  I like it.   A white wine which has subtle weight and palate presence. 12.4%, 4g/l residual sugar. 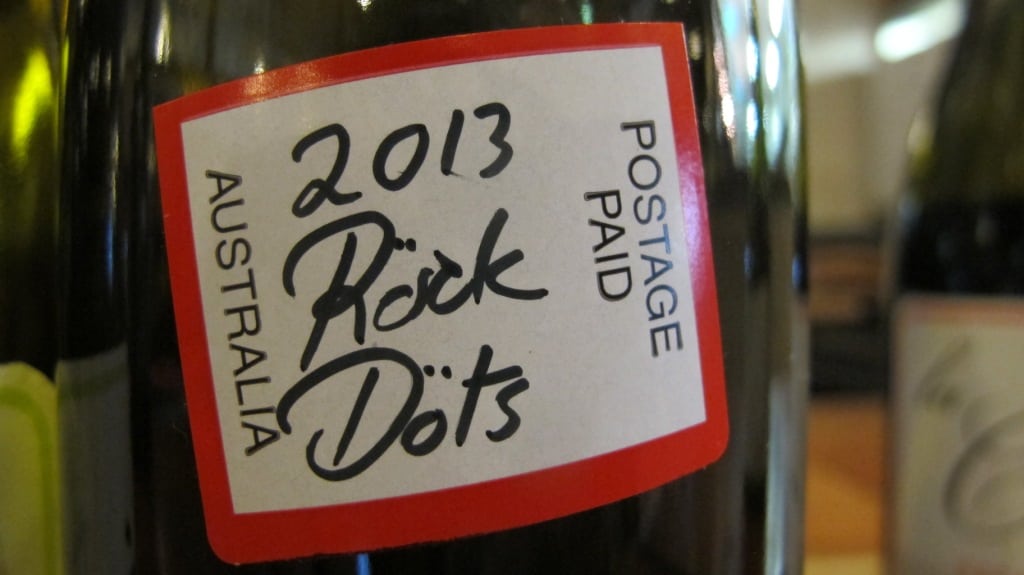 The umlaut is writ large in Hoadley’s packaging.  In case you were wondering (and about das sakrileg), his wife is German. But where he says umlauts and Gewurtztraminer “scare people” the packaging is playful and suggestive of minerality.  “Like Yé-Yé the fruit for this Gewurtztraminer comes from Forest Hill’s vineyards (c. 35 years old) and, in a reversal of fortunes, it incorporates (in fact is co-fermented in barrel with lies with) a splash (15-20%) of Riesling.  Röck Döts has a lovely richness to its nose and palate.  The Gewurtz is round, juicy and spicy with lychee fruit and hints of banana bread (sweetness and spice) and rose petals (nice). The Riesling pulls it out, bringing length to a finish sluiced with rose water/orange blossom water.  The fruit/spice sweetness is tempered by a subtle phenolic grunt which also lends texture and anchors the flavours going through. 13.6%,  4g/l residual sugar. 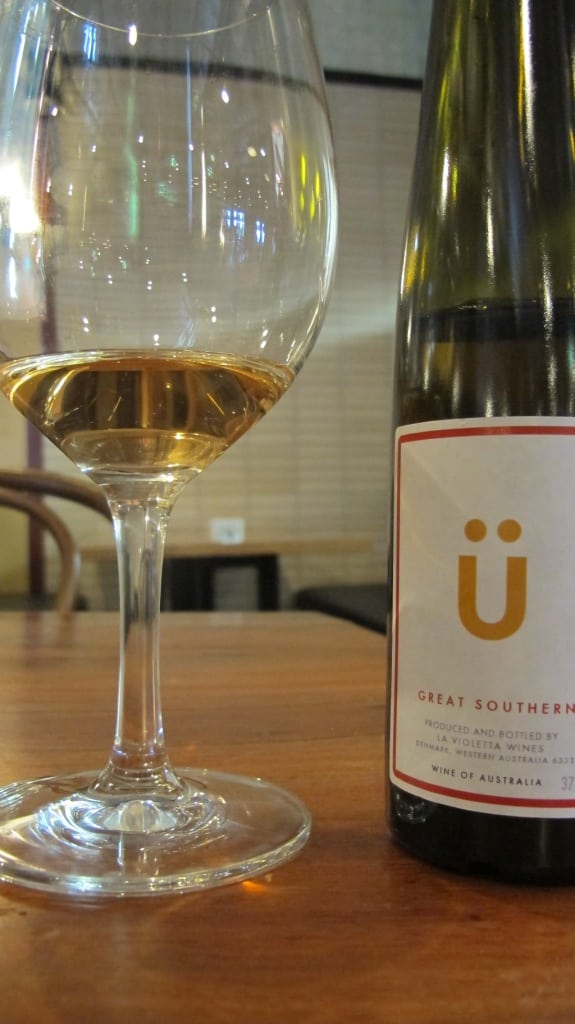 Another Riesling/Gewurtztminer blend.  This variation on the theme goes orange having undergone five weeks on skins.  Zapatista Riesling has been fermented over lightly pressed Forest Hill Gewurtztraimer skins.  It’s pale amber with impressive freshness to its palate of orange blossom and lime shred.  However, texturally, I found its pithy phenolics a little too punctuating/ grappa hard which detracted from the pleasure where this wine is bone dry.  It seems to be missing a bit of flesh or one might say (or excuse it with) the right food?

Now this is the wine I liked against my better judgment!  It’s a wild fermented Sauvignon Blanc which, if my notes serve me correctly, is made from tight green berry second crop fruit where the first crop was botrytised.  It underwent carbonic maceration and then both fermentations (alcoholic and malolactic on skins).  Hoadley judiciously back-blended a dash of barrel fermented Riesling (c. 10%) to increase the acidity and help the wine to maintain microbial stability. On the nose it unleashes über pungent tinned peas and cats pee “perfume” – odour perhaps the better word but at least it’s not sweaty armpit!  In the mouth its has a skinsy, dusty texture to its tinned peas which is swiftly and surprisingly overruled by an assertive charge of zingy fruit and fresh acidity on the mid-palate (I am pleased to report that the cats pee is a no show on the palate).  It finishes long and intense and put a wide grin on my face.  Maybe this one deserves the umlaut smiley face label!?!?

Now this whacky combo (Pinot Noir 60%, Shiraz 39%, Sauvignon Blanc 1%)  I have tasted before – Bill Downie’s One Thousand Candles. Despite being bottled a few days beforehand it has a lovely fresh, pure nose.  In the mouth there’s a peppery backdrop to the attack and finish (a nice thread of fruit tannins too).  While the mid-palate has some attractively sappy sweet blood plum (and contrasting chocolate orange), it’s a little wandering – perhaps in need of more time in bottle to settle down and re-focus?  The Pinot Noir comes from Bob Peruche of Batista in Manjimup whose Pinots I liked a great deal when I visited a few years ago.  The Sauvignon is of the carbonically macerated variety. On the subject of oak, Hoadley is most definitely a fan of seasoned oak – as he puts it “there’s enough savouriness and texture in the fruit to go steady on the oak for reds.  You don’t need to extract every bit of tannin or fruit.” 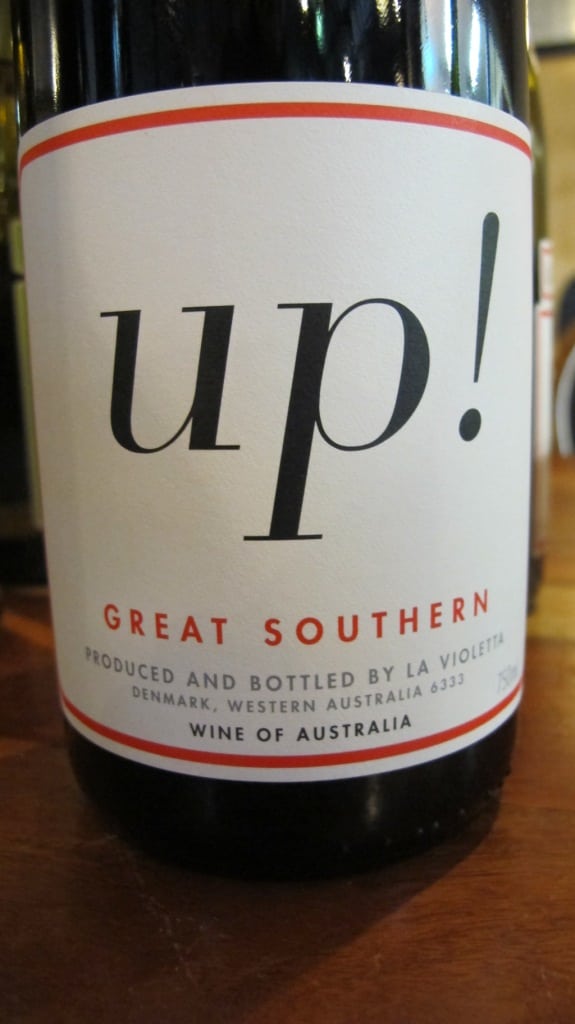 The Shiraz comes from the Xabegras vineyard and around 20% is whole bunch fermented.  It is gently pressed straight to barrel. A very deep hue with a youthfully pink rim.  The nose is deep and nuanced, its deliciously pure, translucent fruit shot through with black pepper and white flowers.  Characteristics which follow through on a lifted palate which really lets the blackcurranty fruit sing.  Chalky tannins and animated, fresh, almost crunchy acidity add to its sense of frame and elegance.  Terrific, with lovely resonating pepper spice through the finish.  Uplifting and so very well named in this vintage. 13.6%

This Shiraz comes from the Fig Tree vineyard (37 year old vines).  From a different vineyard and with no whole bunch this is a very different animal, in fact quite animal with a touch of blood and bovril to its dark fruits.  I much preferred the 2013.

From the Kalgan vineyard (which produces gamy, peppery Shiraz) this has a “bucket of Cabernet” and around 10% whole bunch. Lovely aromatic lift with bay leaf spice and blackcurrant which follow through on an intense, brooding palate with fine powdery chocolatey tannins.  It has the mouth-coating, tongue-cleaving intensity I associate with a brawny bit rough around the edges Cornas (a good thing).  It’s not trying to please you, not yet anyway.  Lots of potential.  Very good.  14.2%

Also from the Kalgan vineyard and this, my watershed Western Australian Shiraz (with a dash of Cab and Viognier), is still looking very good.  Into even more savoury mode now of course it is multi-layered with a gamey, ironstone tang/bloodiness to its concentrated, now slightly tarry, black plums, a rasp of black, some green, peppercorn and coffee rock oak on the finish.  Satisfying without being heavy – it’s about the spectrum of flavours.

For Shiraz seasoned oak predominates but for this inky blend of (mostly) Malbec (from dry grown 25 year old vines) and Cabernet Sauvignon, Hoadley has gone for 100% new oak (just one barrel was made after all). Oak which is readily mopped up by a bottomless pit of bay leaf and violet threaded sweet berry fruit.  Fine grained tannins and balanced acidity make for a long, fluid finish in spite of the heft.  A baby with a bright future ahead. 13.9%