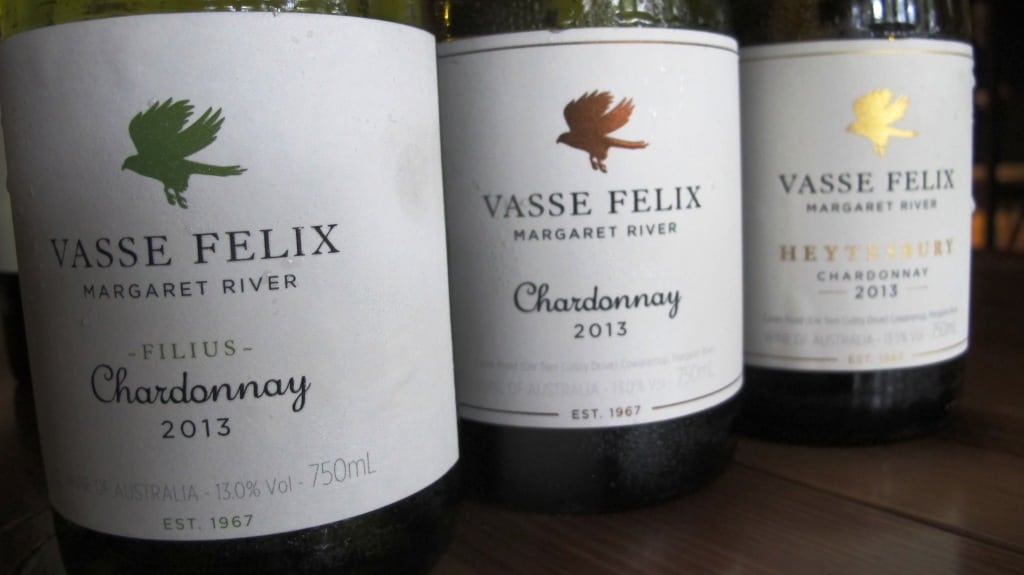 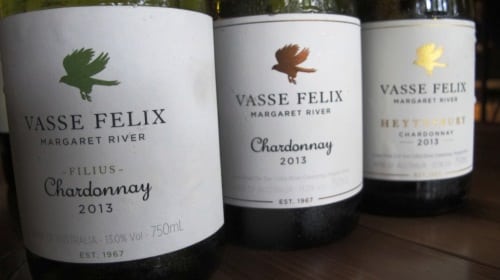 Given Vasse Felix’s towering reputation for Chardonnay these days I must admit that I was taken aback to discover that the Margaret River winery didn’t make a Chardonnay for its first 24 years!  But there’s nothing like making up for lost time and, as of this year, Vasse Felix can boast three Chardonnays with the introduction of a new middle-tier.

Very good it is too.  Below you’ll find my notes on all three latest Chardonnay releases but first, here’s a quick low down on the evolution of Vasse Felix’s Chardonnays courtesy of winemaker Michael Langridge, who hosted my July visit.

The first Chardonnay was introduced in 1990.  By 1996 a Reserve (since re-christened Heytesbury to designate its top tier status alongside Vasse Felix’s top red of that name) showcased the best of the best barrels.  In tune with the times, it was “stylistically quite a big wine,” says Langridge.

By the time current Chief Winemaker Virginia Willcock came on board in 2006, the Wilyabrup-based estate had acquired vineyards in Carbunup further inland (20km), cooler Karridale to the south and at Gibraltar in Wilyabrup – an elevated greenfield site which I can recall touring with Willcock in 2007 as the bulldozers were ripping the soil.  These sites have helped not only to cement Chardonnay’s position as a core wine at Vasse Felix, but also loaned themselves to producing three different styles of Chardonnay.

Referring to the differences in terroir Langridge observes with its sandier soils and warmer inland conditions Carbunup has earlier ripening Chardonnay which has a riper profile (acid degradation here is faster).  Qualities which are key to Filius’ fleshier, stone-fruited style (Filius is the new name for Vasse Felix’s entry level Chardonnay).  I like his description of the site influence on the other two sites – “more structural back palate elements.”  Drilling down further he observes Karridale fruit from the south is naturally higher in acid, sometimes more herbaceous, very aromatic and concentrated. Wilyabrup, says Langridge, “has the best of everything” – concentration, structure, length and slightly more robust, less citrus acid with a lower malic acid content than Karridale (which makes it less searing, he adds).

Vasse Felix has a range of Chardonnay clones to draw upon too.  Gin Gin clones from different sources which, says Langridge, are valued for their phenolic weight and structure.  Faster-ripening Bernard (Burgundy) clones 95 and 96 (plus a small amount of 76) tend towards a more elegant, delicately textural “pillowy” style of Chardonnay.  Big berried Champagne clones at Carbunup make for a more forward, less structured palate.

As for the winemaking, although trials with wild ferments, no malolactic fermentation and different oak profiles were underway already, when Willcock came on board she fast tracked the trials, pushed for more solids and a focus on small parcels and different clones.  These days all the Chardonnays are 100% naturally fermented as slowly and with as much solids’ retention as possible (more on this in an earlier interview with Willcock).  Lees stirring is batch by batch.

This, the green-foiled entry level wine, leans heavily on Carbunup’s more expressively fruity Chardonnay for stylistic direction – it accounts for perhaps 70% of the fruit (the balance coming from Karridale, Wilyabrup and Yallingup).  With more or less the same winemaking process as the others  (just less new French oak – 28%), it’s all about identifying parcels of fruit that are approachable and consistently fruity.  Though undoubtedly the easier-going more fruit-focused of Vasse Felix’s Chardonnays, this wine’s mouthwatering, tangy fruit underscores the winemaking team’s love of acid.  The nose reveals rock melon and an appetising peach fuzz (skin) tartness, both of which notes follow through on the palate together with pineapple, apricot (again with a tart touch of under-ripeness); the finish has a pleasingly tangy (think yoghurt) textural note.  15 000 cases made.  13%  £15.99 at Majestic and currently on a mix and match 2 bottles and save 15% deal when you buy any 6 bottles (£13.59).

This new mid-tier gold-foiled wine made from best parcels of gin gin and Bernard clones aims to showcase Margaret River’s classic style, in other words, fruit power with formidable structure.  And it does so with considerable aplomb.  Fermented and aged for 9 months in 100% French oak (45% new, 55% 1 – 2 year old) it reveals spicy oak, dried pear and white peach on the nose.  In the mouth satiny white peach flavours are animated by a lively undertow of crystalline lemony fruit and shimmering minerals, while a hatful of subtly savoury nuances – sour dough, vanillin, smoke, toasty oak and nougat – bring complexity and balance. With its tight citric backbone, the finish is well focused and firm, which suggests this sleek and shiny new wine will age very well. 2000 cases were made.  13% (I don’t believe that this wine is yet available in the UK and it’s worth noting that a number of retailers are still referring to the Filius as Vasse Felix Chardonnay in their headline listings, so watch out for the gold foil!)  UK RRP £20.99; listed by N D John.

Heytesbury is an unashamedly funky style with lashings of struck match, flint, mushroom and earth.  If you like, it favours house (over regional) style.  The aim is to make an individual wine from those barrels which really express a wildness of character.  It was aged in 100% French oak for 9.5 months (73% new, 27% 1-2 year old).  Perhaps its wildest characteristic is a very involving (lots of mouthfeel), waxy, savoury texture (which Langridge describes as greasy lambfat – not something I’ve experienced in a good long while but I get it).  It puts the fruit at a remove – as if through a wax film.  There are oilskin/lanolin flavours too – round and savoury, which are deftly cut by perky chimes of citrus (pink grapefruit, lemon rind, salted limes) which lead your palate on a merry dance – a game of hide and seek.  Highly individual in a really good way.  1500 cases.  13.5%.  I’m informed on the seas. UK RRP £35.99