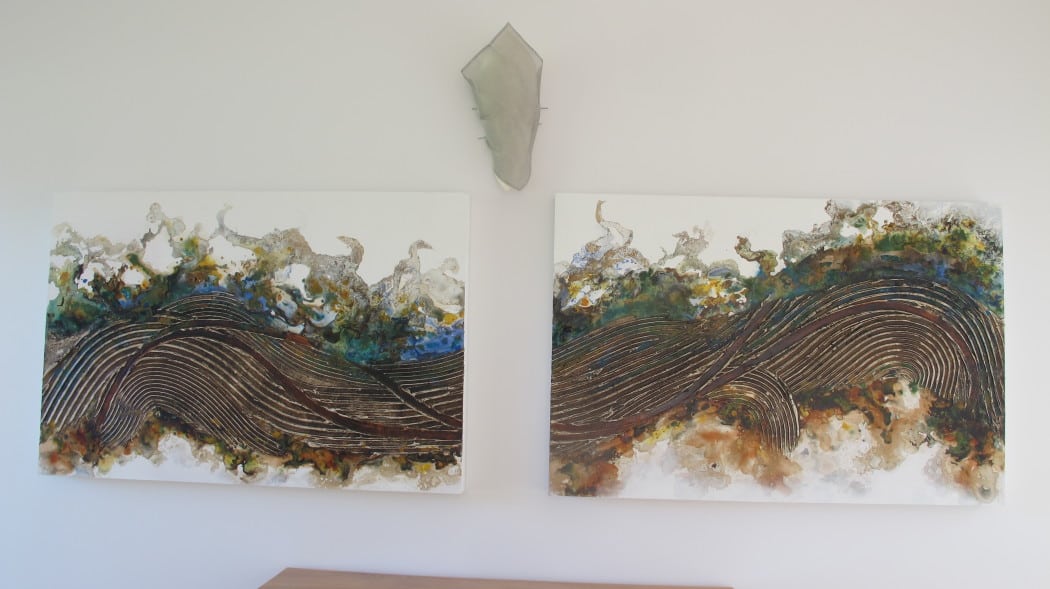 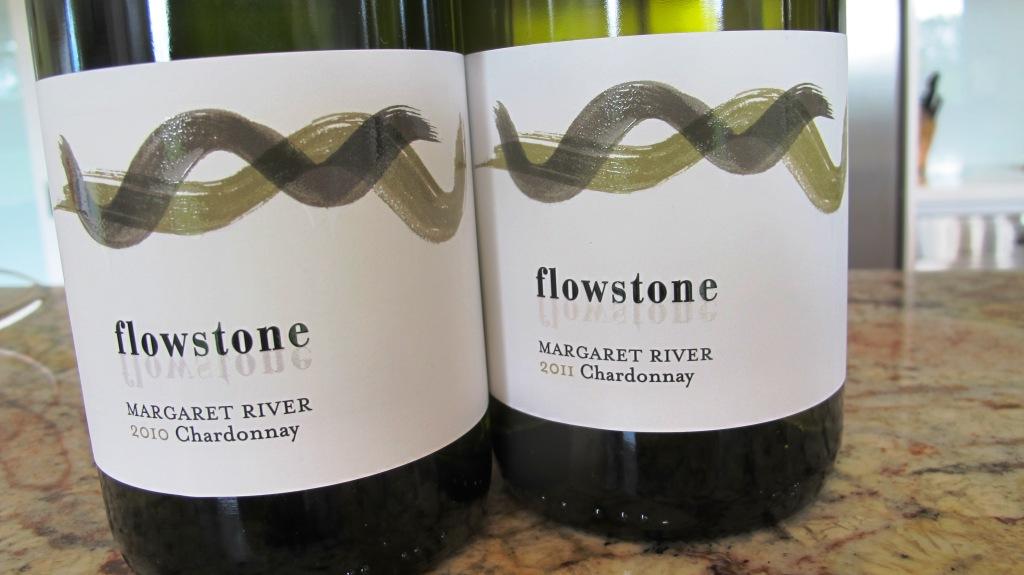 The flow of water in Margaret River has defined its caves, vineyards (invariably clustered around drainage basins) and, of course, its status as Western Australia’s surf capital.   A cave and vineyard landscape which is represented in the dynamic grey and green brushstrokes of Flowstone’s label.

Although grapes are sourced from across Margaret River, the Flowstone vineyard itself (a diminutive 2.25ha planted in 2004 and 2009 on a gravelly rise with deep gravel loam soils) is located in Forest Grove, a stone’s throw from the subject of last Friday’s post, Devil’s Lair. Both Pym and his wife Janice Macdonald (also a winemaker) worked there prior to starting up Stella Bella, another southern Margaret River brand.

Prior to Devil’s Lair, Pym worked at Voyager Estate and, some 30 years ago, started out in wine helping his parents with their vineyard/Margaret River label, Sussex Vale (located in Wilyabrup and now home to Hayshed Hill).  So it’s interesting to see where he himself has chosen to set up shop.

With 1200mm rainfall a year – thank goodness not in summer – apparently the area around Witchcliffe/Forest Grove is one of the wettest places in Western Australia.  And being in the south, it’s the cooler end of Margaret River.  Perfect for whites then and, for me, the estate-grown Chardonnay and southern-sourced oaked Sauvignon were the stars of the show.  Pym also makes a Gewurtraminer, Cabernet Touriga and a Cabernet Sauvignon, the former and latter 100% sourced from Wilyabrup.

Here are my notes on the whites. 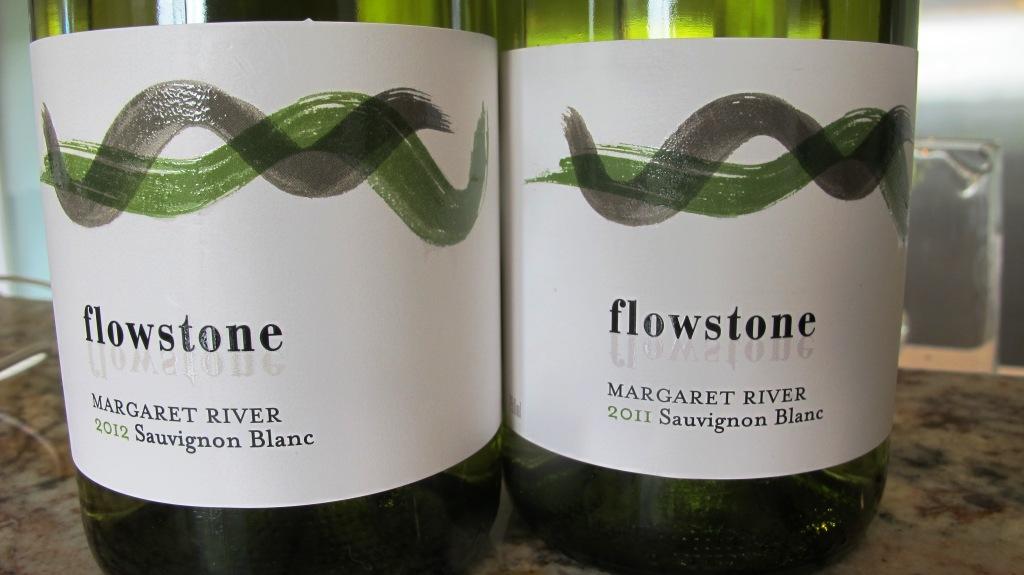 Sourced from a single south-facing vineyard in Karridale on gravelly loam this barrel fermented and aged (c. one year) Sauvignon is “free of the nervy pressures of immediacy” (a phrase I’m happy to steal from the non-technical but no less accurate part of Flowstone’s technical fiche).  Rather it’s a shapely, textural un-screechy Sauvignon which gently reels you in with its subtle lift of smoky flint and pea pod and stone fruit rondeur (it was aged on lies with occasional battonage).  Gravelly acidity underscores and teases out a long finish.   Very good; complex and ageworthy without resorting to new oak thanks to its fruit weight and balance.  12.5% alcohol.

From a single Karridale vineyard in southern Margaret River.  The fruit was hand harvested, whole bunch pressed and fermented and aged in French oak (15% new) for 11 months with occasional battonage.  It was aged for a further 30 months in bottle prior to release which, doubtless, contributes to its complexity and unflustered, seamless and unshowy delivery.  And I say that even though Pym, it might be said unfashionably,  has no qualms about letting the oak or fruit generosity show.  Very delicious it is too with beautifully integrated layers of  toast, smoked hazelnut and nutmeg to its juicy white peach and apricot fruit. Lovely gently creamy texture too (it does the full malo but gracefully) which, combined with its persistent undertow of round ripe acidity (none added), makes for a wine of generosity and restraint.  Great craftsmanship and sleight (perhaps slight!?!) of hand both.  12.5%

The 2011 (to which I’m told the 2012 and 2013 are more comparable), is a little less oaky yet more savoury with a subtle sour dough tang to its yoghurty (rather than creamy) textural palate.  Silky white peach with a tangy peach skin riff makes for a shapely yet persistent palate.  Lovely meandering length with great persistence, intensity and complexity of flavour. 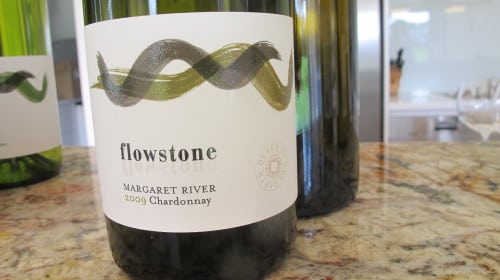 This hails from the first crop from the Flowstone vineyard- 0.5ha planted in 2004. Wowee.  They do say first crops outperform and this most certainly exceeded my expectations of five year old vines!  It has a Burgundian weight and intensity to its rich savoury palate with struck match, sour dough and a yoghurty tang and texture to its stone fruits.  Beautifully integrated rolling acidity carries a long, sensual finish with a sense of inner glow.  A terrific debut made from hand harvested, whole bunch pressed fruit which was fermented and underwent full malo in French oak (50% new).  It was aged in barrel for 17 months with occasional battonage and then aged for a further 36 months in bottle.  Bravo.  13% (Just 75 cases!)

Although it was one of the early varieties planted in Margaret River (and Great Southern where I recently tasted examples from La Violetta) it’s a bit of a curio today.  This wine is from 3 rows of 35 year old plus dry grown Wilyabrup vines – the entire Gewurtz crop of that vineyard.  The fruit was hand harvested, whole bunch pressed and fermented then aged in 3 year old French oak barrels for 15 months with occasional battonage.   It offers up a richly complex nose and palate – quite Alsation – with exotic Turkish delight, a hint of bacon fat and sweetly spicy banana bread to its succulent lychee fruit. Though the phenolics are a little firm better bony than blousy.  I liked it a good deal; a great wine for the table.  13%