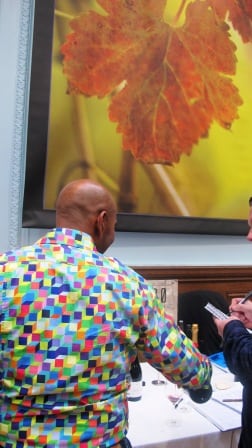 Catching up with Geelong winemaker Ray Nadeson was a highlight of the Australia Day Tasting though, with his dazzling shirt (pictured), I think he may have taken Andrew Caillard MW’s comment about being one of Australia’s brightest stars just a bit too literally!

But fair dues. Like the shirt and its wearer, the best wines are chock-full of personality. Perhaps unsurprising where Nadeson and Lethbridge Wines’ co-founder/fellow winemaker Maree Collis started out in an entirely different field. The pair trained as research scientists (they hold PhD degrees in chemistry and medicine respectively) before catching the wine bug and completing winemaking degrees at Charles Sturt University.

Lethbridge Wines was founded in 1996, though they only jacked in the day jobs in 2003 to concentrate on winemaking and, I should say, grape growing because the vineyard is cultivated biodynamically plus the approach here is very site-specific. “I can’t help it, I can’t blend anything away” says Nadeson, who vinifies no less than twenty-seven individual parcels separately.

Which makes sense where the estate vineyard is divided into two distinct soil types:

I found none of the under-ripe/over-ripe sweet and sour characteristics in Lethbridge wines which I’ve noticed in some Geelong wines. Nadeson says perhaps because Lethbridge have no coastal vineyards – “we’re at the other end – uphill, where the soils are different (with limestone and black clay) and there is greater continentality/diurnal temperature variation.” In other words, it’s cooler which point he reinforces by pointing out “we pick 3-4 weeks later than [neighbouring] Mornington Peninsula [though Mornington Peninsula of course has its own microclimates].”

Here are my notes on the wines which are imported by Berkmann Wine Cellars. Click here for an earlier review of Lethbridge Allegra Geelong Chardonnay 2007 which I enjoyed very much a couple of years ago (hence my bee-line for Berkmann’s stand).

You can read more about Lethbridge Wines on the producer’s website here. It’s refreshing to see the scientists’ open-minded approach to biodynamics: “[O]ne thing that 15 years of a scientific career has taught each of us is, that to be skeptical is good but strong evidence for an observation should not be rejected just because we have no explanation for how it may work.”

I’ve loved the Rieslings from Crawford River and Seppelt (Drumborg) which I’ve tasted from this far flung region of Victoria located right on the border with South Australia’s Limestone Coast. This naturally fermented foudre-aged Riesling is no exception. It’s very pure and expressive, floral with orange geranium notes and an impressive undertow of ripe, grapefruity acidity (think ripe pink grapefruit sorbet) which gives line, length and balance (this wine has 10g/l of residual sugar and a very lowly pH of 2.9!) Very drinkable with good ageing potential too.

Planted in the mid-80s in marly clay soil this is a racy, pacy Chardonnay with lovely lemony (100% natural) acidity and levity, but also plenty of subtly insinuating texture and layer – a glimmering sandstone minerality going through. Very persistent. My mouth is watering remembering it!

The Allegra comes from ironstone quartz soils over limestone. The almost glancing nose has pronounced struck match and a Riesling-like wet slate minerality. Characteristics which follow through on a firmly structured, tightly coiled palate. It fair bristles with potential but, six years in, it’s still so very closed that I find it somewhat inscrutable. Nadeson says the 2005 is the one to drink now. One to review in three years then!

At the fuller-bodied end of the spectrum, according to Nadeson this comes from the oldest vineyards in Geelong planted in 1968/69 to the MV6 clone on limestone. It’s very plush and expansive on nose and palate with concentrated plum and cherry fruit, earth and five spice. The tannins are ripe but firm, so good support for the fruit. Well done in a distinctly Australian style (emphatic fruit power).

Quite different from the 2010 – paler, seemingly less extracted with prettier red summer fruits – strawberry and red cherry and persistent acidity. Yielding velvety tannins make for a very supple whole, as does its loamy, chocolatey finish.

My pick of the Pinots. With its sinewy backbone of tannins and pithy, spicy and fresh red fruits this has a distinct crackle of energy – a linearity and pull which makes for a very persistent, intense and engaging Pinot Noir. I reckon some whole bunches/stems here bring lift and line. Really good.