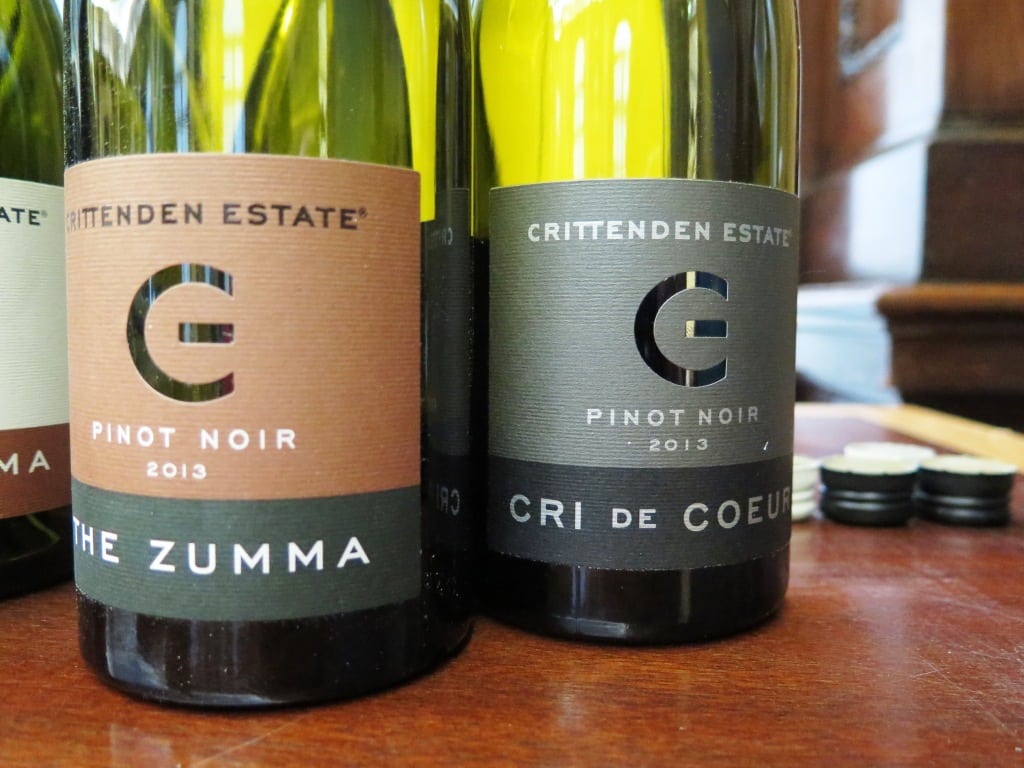 Australian Pinot Noir under the microscope 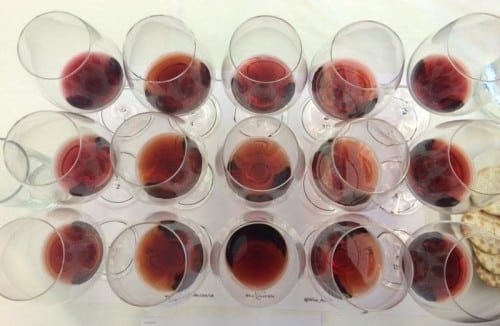 Last Monday I had the pleasure of presenting five mini-vertical flights of top Australian Pinot Noir from the Yarra Valley and Mornington Peninsula for a Wine Australia masterclass.  A head-to-head  which drilled down to explore up hill down hill differences in both Victorian regions as well as the impact of clones, vine age, use of whole bunch and vintage.   They brilliantly articulated a sense of place and the light and shade of vintage. No doubt about it, you can find great intricacy, levity, intensity and layer in Australian Pinot Noir these days.

The tide has turned rapidly for the pale, thin-skinned(think Pommie not Pommard) grape variety which, pale and medium-bodied, was once regarded as positively un-Australian!  When I contacted Carson before my presentation to catch up on latest developments he reported, “Pinot Noir is growing, particularly at the premium end of the market and, whilst 10 years ago there was very little Pinot Noir on restaurant lists, now good restaurants offer Pinot by the glass and have numerous listings, often broken down by region.”

As for on the ground, he confirmed that producers now generally prefer a multi-clonal approach. Of the five different Pinots shown, only the De Bortoli (which came from the oldest vines, planted 1971) was mono-clonal.  Most had a smattering of Dijon clones (which first arrived in Australia in the 1990s), which brought floral lift and pretty red fruits to the party.  Still, these days Australia’s original, most ubiquitous clone – MV6 – is popular not by default but by choice thanks to its “much greater” consistency across vintage, later ripening cycle and low yields of small berries which accentuate structure.  You might say it’s the backbone of both Australian Pinot Noir’s vines and wines.  Giant Steps’ Phil Sexton is not alone in planting more.

Site, however, remains most important of all and, says Carson, Australia’s Pinot producers continue to interrogate those regions, vineyards and blocks which are best suited to the variety.  All five producers whose wines I showed produce at least one single vineyard Pinot Noir.  And, where the quest for the best revolves around site, competition for fruit has become intense – take the Upper Yarra Valley where Phil Sexton has now acquired Applejack vineyard (bad news for Oakridge, whose Guerin Vineyard label has gone) & Treasury Wine Estates, who have bought the Gladysdale vineyard (bad news for Sexton).  Swings and roundabouts!

Here are my observations on each flight. 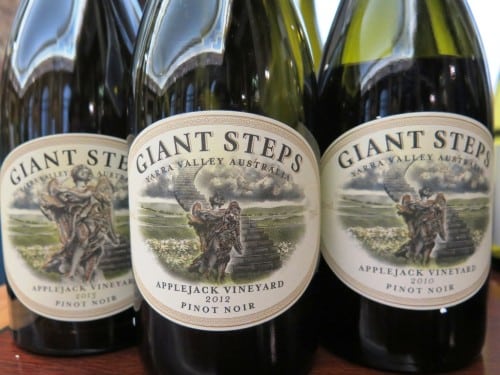 From up hill – Gladysdale in the Upper Yarra – this single vineyard fine-framed Pinot comes from a steep, north-east-facing site at 330m on dark red volcanic loam at, says Sexton, the dry end of the dry grown spectrum.  It’s very cool with very little wind movement (which can dry the berries).   The vineyard was planted in 2001 to MV6 (which did not appear in the 2010 vintage) and Dijon clones 114 and 115.

Giant Steps use a degree of whole bunch.  Sexton told me “we’d go 100% whole bunch if we could but we can’t if the wood isn’t lignified.”  In common with all the other producers the grapes were not crushed since, with whole berries it’s possible to ferment slower and maintain lower temperatures, which helps preserves freshness and aroma.   The wine was fermented in 1500l oak vats and aged for 11 months in 225l French oak barrels with around 30% new oak.

As was the case for the other flights, I found the 2010 relatively evolved – less vibrant in fruit/acidity – than subsequent vintages.  The 2010 vintage came off the back of a succession of drought years and was followed by an abnormally cool, wet difficult year.  I wonder (especially since the 2011s greatly appealed to some with their grace and lift)  if, having brushed against the very limits of ripeness in 2011, producers have since felt more confident about picking a bit earlier for higher acid retention/less sugar?  Just a thought….

My pick of the Giant Steps’ flight was the 2012.  It was also my wine of the tasting and is one of my Wines of the Month (full tasting note here).  With lovely tension and lift, it perfectly trod the tightrope between ethereal spicy stemmy notes and silky red fruits.   The floral, perfumed 2013 came close; the fruit here bright and a little more concentrated than in 2012. 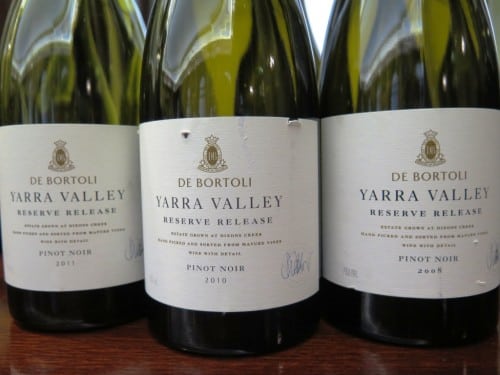 From down the hill, in the Lower Yarra, Dixon’s Creek, this single vineyard Pinot Noir comes from a warmer area of the Yarra than Applejack – further north and, at 140-150m, significantly lower.  Planted on an easterly facing slope and with a moderate size hill behind it, winemaker Sarah Fagan told me it is protected from the heat of the afternoon sun.

Soils are ancient very old water-based sedimentary mudstone with minor very fine grained sandstone.  The vineyard was planted in 1971 to clone MV4/5 which is not believed to be in commercial production anywhere else.  It has small bunches and tiny berries which account for this wine’s signature back palate tannins, a real stand out of the tasting.

This wine sees no whole bunch (“purely because we reach flavour, tannin and general fruit maturity before appropriate stem ripeness,” says Fagan), but was 100% whole berry (uncrushed). It was aged in French oak barriques (30-40% new) for 10 months.

The de Bortoli Pinot was the most singular wine of the tasting.  Very consistent of character across the flight with plummy fruit and, thanks to those tannins, a sturdy frame and very savoury, mineral, earthy expression. Chocolate cropped up in all my tasting notes too.  From a drought year, the 2008 had noticeably more sucrosity. 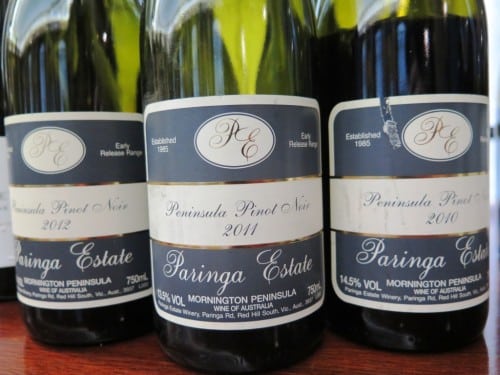 All three Mornington Peninsula producers make single vineyard wines but our line up explored each rung of the quality ladder.  First with Paringa’s entry level Pinot (sourced from across the Peninsula and from estate, leased and grower fruit), then Ten Minutes by Tractor’s Estate blend of the producer’s original three vineyards), finishing with Crittenden’s top tier single vineyard wine.

This wine sees no whole bunch (winemaker Lindsay McCall says he is resisting the current trend for stemmy whole bunch Pinots); grapes were not crushed.  The wines were aged in 100% French oak barriques for around 10 months with around 10% new oak but, in 2011, perhaps 20%, because McCall de-classified quite a bit of Estate & Single vineyard fruit.

As you’d expect from an entry level (premium) Pinot Noir, in 2012 and 2010 the Paringa Peninsula has svelte red and black fruits – nice mid-palate generosity with ripe but present supporting tannins.  The 2011 is quite different, leaner, with herbaceous, spicy notes to nose and palate, even a touch of white pepper and pine needle.  I liked it’s juicily persistent finish, fine spine of tannins and very delicate fruit expression very much.  For some, it was just too lean, but others fell for for its more ethereal expression. 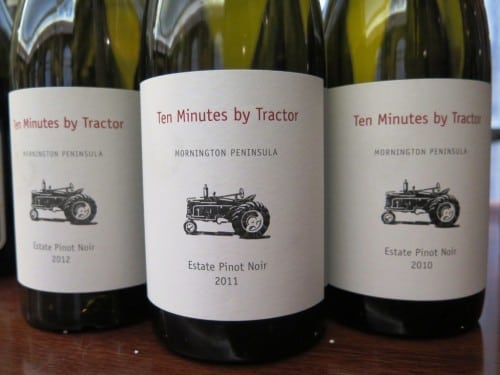 All three vintages shown comprise a blend of this producer’s original vineyards – Judd, Wallis and McCutcheon. The site focus to which Carson referred is reflected in Ten Minutes by Tractor‘s very detailed vineyard analysis on their website – well worth a look to understand the variables which impact on their wines.

These three original elevated vineyards are located in Main Ridge, up the hill (142-206m) in the south and are affected by chilly Bass Strait sea breezes as well as those coming off Port Phillip and Westernport Bays.  It’s why temperatures in the south are lower by a factor of around 1.5 degrees centigrade, which translates into a harvest which is 2-4 weeks later.

The vineyards were planted in the 1990s on silty clay loam over red ferrosols; clones include MV6, 115, 777 and G5V15 which, save for MV6 (“by far the least fickle”) can perform very differently depending on vintage according to the winemaking team.  In cool years, 115 & 777 are pretty, floral, primary fruit scented, silky and fine but can be surprisingly structured in a warmer year. Similarly, G5V15 is very seasonally dependent, providing very aromatic high notes in some years and, in cooler years, fine structure and vibrant fruit line.

With longer hang times, Ten Minutes by Tractor’s perfume and silky tannins stood out.  Once again, the 2011 vintage was divisive.  Too lean and green for some, but delicate, spicy and ethereal for others (me included).  There was no shortage of fruit in 2010 – a rich wine, really quite bold of expression compared with the earlier wines.  It seemed to me that the 2012 pitched it just right – silky and fine, with a lovely expression of ripe red fruits and a complexing, teasing hint of herbaceous lift for tension. 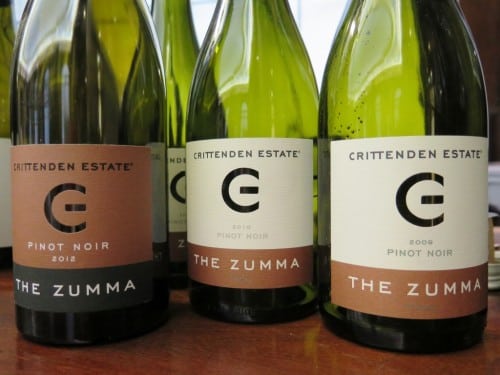 Crittenden Estate‘s single vineyard The Zumma comes from Dromana, down the hill in northern, Mornington Peninsula at 50m.  Though significantly warmer than up hill sites Port Phillip bay, just 5km away, has a cooling influence which Rollo Crittenden reckons means Zumma “often shows a level of elegance that belies our location.”

The E/W facing slope, originally planted in 1987 to the champagne clone, D5V12,  is planted on  well drained sandy loam over clay.  Additional Pinot Noir clones have since been introduced (via head-grafting) – in 1993, MV6, and in 2008, the small bunches/structural Pommard clone (which features only in the 2012 Pinot).

Rollo had a bit of a whole bunch “epiphany” in 2012, when Crittenden used around 10% whole bunch and, in 2013, 20% whole bunch (all fruit is not crushed).  From this year, the winery also started using a large French oak fermenter for some parcels.  In 2012, they also produced a 100% whole bunch wine, Cri de Couer.  Crittenden sent both 2013s over specially for our tasting so we could compare Zumma 2013 and Cri de Couer 2013.

While Cri de Couer is barely macerated, the other wines were hand plunged three times per day during the peak of ferment.  The Zumma wines were aged for 10 months (2013, 2012) and 15 months in French oak barriques (around 30% new), light toast from 2010;  Cri de Couer sees no new oak and spent 17 months in barrel. 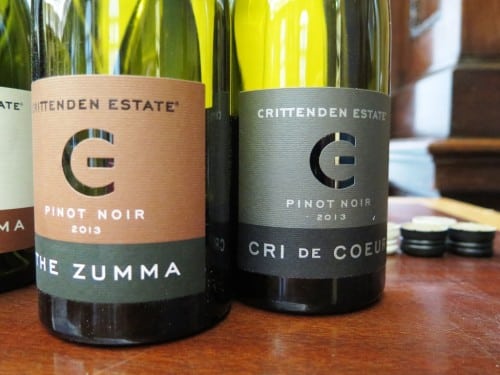 The Zumma’s down hill warmer location was broadcast by its deeper hue and more generous, expressive, fruit.  Understandly, the 2009 from a drought year looked riper, very generous, still with lashings of sweet raspberry fruit – impressively primary if a little simple.  For me, a degree of whole bunch brings a little more tannin edge and savoury spicy fragrance to balance this generosity of fruit – I liked the 2012 and 2013 Zumma very much.  As for the 100% Cri de Coeur, I can well understand why no new oak was used and the ferment continued without intervention until the 14th day when the grapes were foot stomped then immediately pressed.  The savoury, meaty fruit tannins define this wine’s funkier flavour profile without imposing too much structurally.  Which gives it a long, juicily persistent mineral acid finish.  Very food friendly.