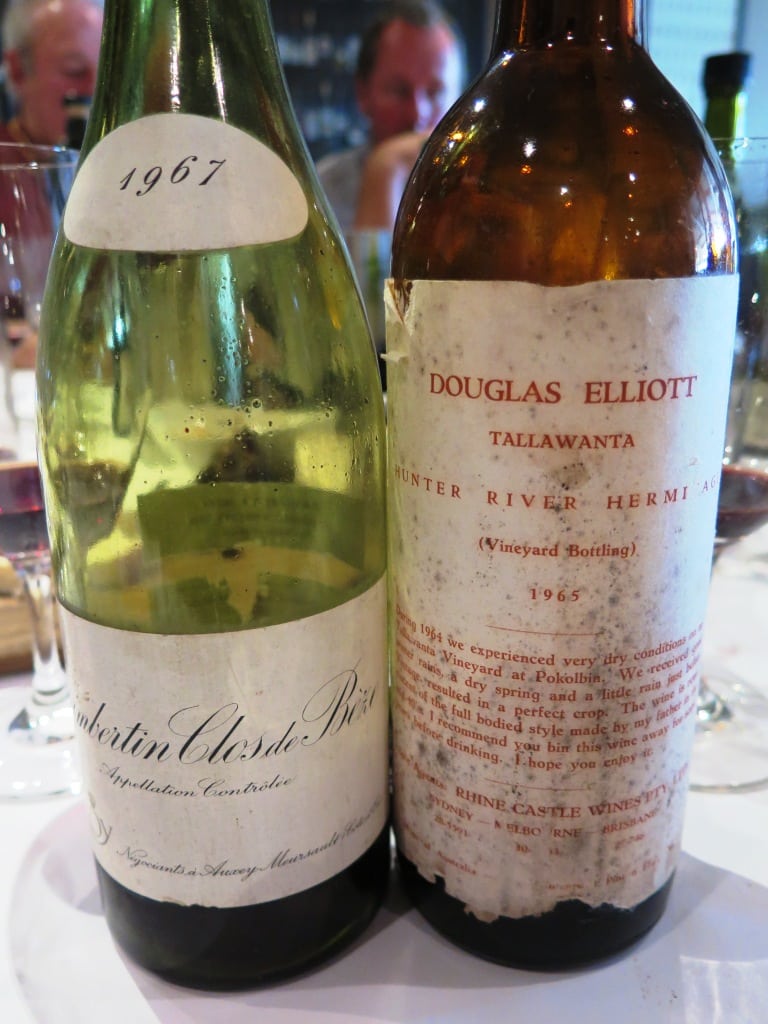 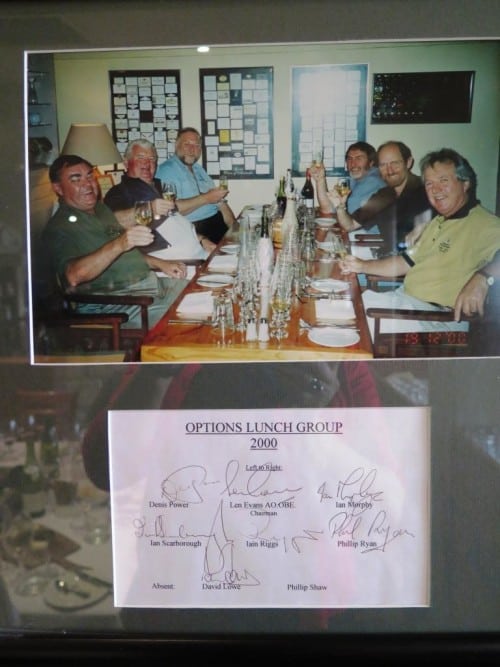 I have been in the Hunter Valley, New South Wales for the best part of two weeks.  First, visiting producers and getting the lie of the land (including one of the spots where it all started – James Busby’s Kirkton vineyard).    This week judging at the 2015 Hunter Valley Wine Show.  It has been a fantastic immersion in a region which well and truly cemented for me not only the uniqueness of its immensely characterful Semillon and Shiraz wines, but also the Hunter’s fine wine credentials.

Fine wine credentials revolve around great terroir, ageworthiness and a wine culture of excellence.  The Hunter seems to be blessed in all three.  Focusing on a culture of excellence, it was in the Hunter at Kirkton where Australia’s so-called “father of wine” James Busby planted among the country’s first cuttings. Cuttings which he had personally sourced from Europe’s finest vineyards including the hill of Hermitage and Clos de Vougeot.  What’s more, the Hunter was home to “the father of Australia’s modern winemaking,”  Mount Pleasant’s Maurice O’Shea who presided over some of the region’s most venerable vineyards – like Old Hill, planted 1880 (pictured below).

It is also where two of Australia’s most influential opinion formers, James Halliday and the late Len Evans OBE (pictured top, middle left), themselves chose to invest (Halliday in Brokenwood, Evans in Rothbury Wines, then Tower Estate).   Evans, who died almost exactly nine years ago, cropped up a good deal in conversations this last fortnight.  Not least at yesterday’s monthly meeting of the Hunter’s “Options Lunch Group.” Evans founded the club and the options blind tasting challenge around which it revolves.   His aim?  To help forge an Australian wine culture of excellence by encouraging Australian producers to drink among the world’s best and sharpen both tasting and wine-making skills.

I was honoured to be invited to crash this rather exclusive club by J P Charteris who, this year, became the third distinguished winemaker to succeed Evans as Chair of the Hunter Valley Wine Show.  Huge excitement at being asked was, however, balanced in equal measure by the somewhat intimidating prospect of doing battle against such exceptionally gifted and experienced blind tasters – a sport in which I have barely participated since finishing my WSET Diploma 12 years ago! 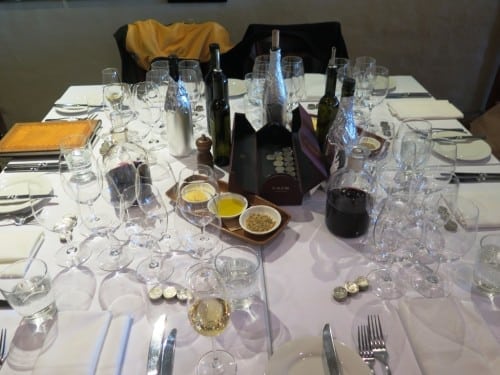 Girding my taste buds with the help of a glass of Krug, I took my seat at local institution The Cellar restaurant in plain sight of Evans, looking down at me from on high.  Not heaven, but a photo of an earlier sitting of the group (at which, no doubt, heavenly delights were decanted).  I hoped to take my inspiration from even higher – the magnificent bottles that lined the picture rail around the room.  Might they jog my memory about communes, vineyards, vintages and domaines? I fervently hoped so! 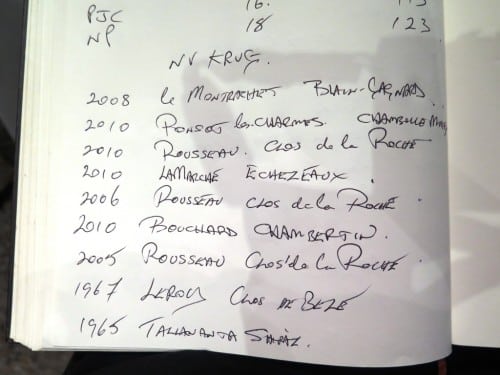 On this occasion, eight of us clustered around a table groaning with glassware and fine Burgundy.  (Burgundy is always the August, indeed august, theme of choice in homage to Evans, who was renowned for most generously sharing his Burgundy spoils among the wine community).  If you are wondering why the piles of coins and the Krug box wonder no more. It’s a kind of coffin of shame.  Where you toss the coins which, metaphorically speaking, landed tails side up when you’d called heads and gone for the wrong blind tasting challenge option (for each wine you are given three optional answers). 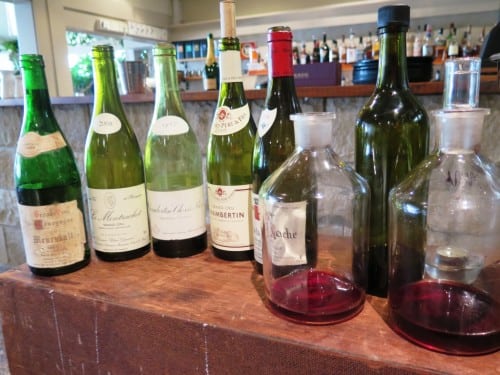 Though I was the only person to toss all my coins and run a deficit, I’m pleased to report that my performance was deemed respectable by Charteris. High praise indeed.  As ever, luck featured, but memories of even a single bottle of great wine can be potent.  And at the end of the day, what’s so intimidating about tasting eight fantastic Burgundies which would never normally come your way with a group of wine lovers?  Like most wine lovers I encounter, what’s most important is to share a great tasting experience. 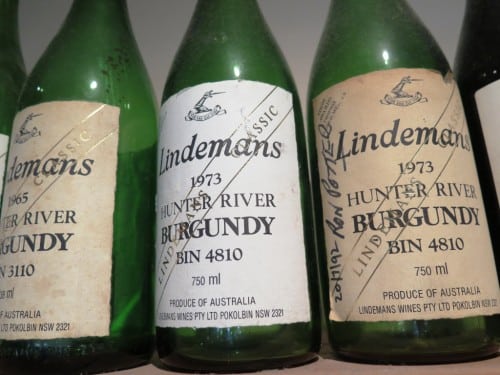 Hearty thanks from me to the Hunter Options Lunch Group for this experience.  One which Brokenwood’s Iain Riggs extended with our final “Burgundy,” this one of the Hunter Shiraz variety (and, as the label suggests, a little more in a Rhone than Hunter vein with its savoury, very spicy dark palate) .  It was particularly exciting for me to taste it because it’s from the legendary 1965 vintage.  A year which many have compared to the magnificent 2014 (red wine) vintage.  It stood up brilliantly alongside the ’67 Leroy Chambertin Clos de Beze. How impeccable was my timing – tasting this very much alive piece of history and judging so many 2014 Hunter Shiraz at the show! 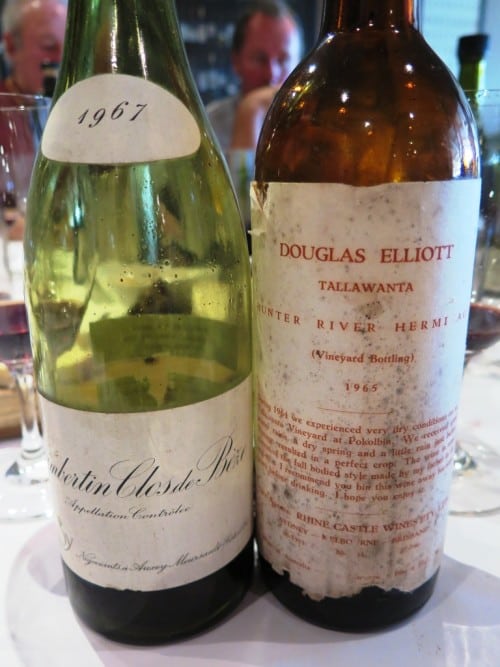 The Douglas Elliot Tallawanta Shiraz 1965 also leaves me with a neat segue into future posts about my Hunter visit in which I’ll explore another aspect of the region’s fine wine largesse – its terroir patchwork.  Tallawanta is the name of a much revered Pokolbin single vineyard whose oldest vines date back to 1920.  Much to his team’s delight, Riggs recently secured it with effect from the much trickier 2015 vintage. Watch this space for my write up on a visit with Brokenwood – let’s just say barrel samples suggest securing this precocious ripening vineyard was another example of impeccable timing!