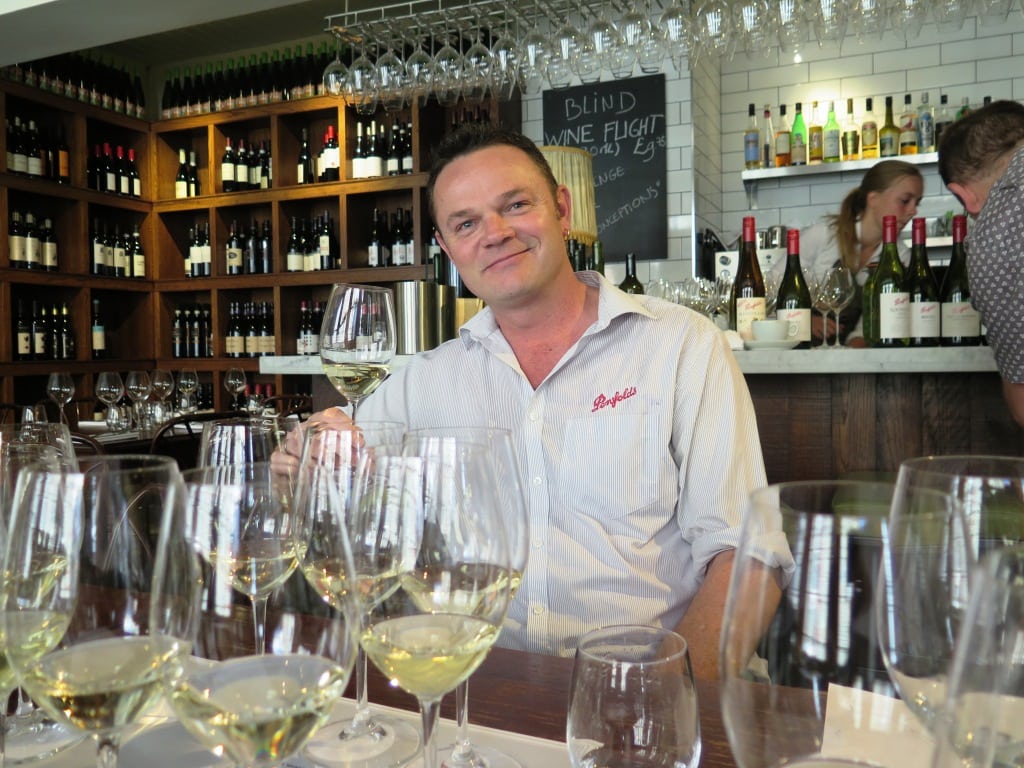 All white now for IWC White Winemaker of the Year, Penfold’s Kym Schroeter 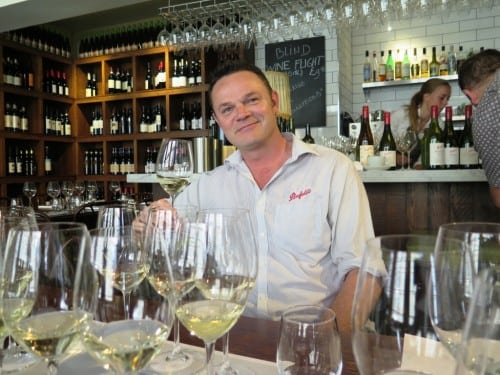 I caught up with Penfolds‘ Senior White Winemaker Kym Schroeter last week hot on the heels of his success at the International Wine Challenge.  No wonder he was smiling.  Though naturally gratified by the recognition of his work these last 14 years, Schroeter was quick to credit his team, also to point out the benefits for the company as a whole.  As he put it, “it’s an impetus to really focus on Penfolds’ whites” and it means “we can show around the world that we’re the complete company.”

Asking Schroeter about the start to his white winemaking career put these comments into sharp perspective. Having followed his father, uncle and brother (all winemakers) into Penfolds in 1987, the born and bred Barossan threatened to resign when asked to move over to whites in 2001 following then owner Southcorp’s merger with Rosemount Estates.  While Rosemount’s Philip Shaw had been an early champion of Chardonnay, Penfolds was almost indelibly associated with powerful red wines.  For Schroeter, “reds were my security blanket” and, turning back the clock,  I imagine that his facial expression rather resembled this second picture when he asked to move to whites! 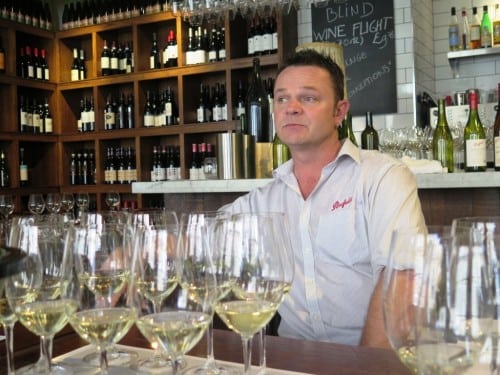 But it’s funny how things turn out.  Looking back, Schroeter tells me the move was the best thing to happen to him career-wise.  He learned a good deal from Shaw, from whom he has clearly ‘inherited’ a great love of Chardonnay.  In fact, he told me “now I wouldn’t want to go back to reds.”

Penfolds’ white portfolio currently comprises 12 wines, though Schroeter is gunning for gold this year – a new top Tassie wine – so excited is he by the 2015 vintage Chardonnay from a vineyard in Central Highlands, Tasmania (“some of the best fruit I’ve ever seen in Tasmania,” he said). I have to admit I’d never heard of Central Highlands but apparently the vineyard (Tasmania’s highest at 250m) is the one and only vineyard in the region.  Until last year, when Penfolds first bought the fruit, it used to go into top Tassie sparkler Arras.  And last year, “it walked into Yattarna.”   Looking ahead, Schroeter would also like to experiment with alternative varieties, perhaps white Rhône grapes Roussanne and Marsanne.  As for our tasting, Schroeter presented mini Chardonnay verticals following a snifter of Autumn Riesling.  Here are my notes: 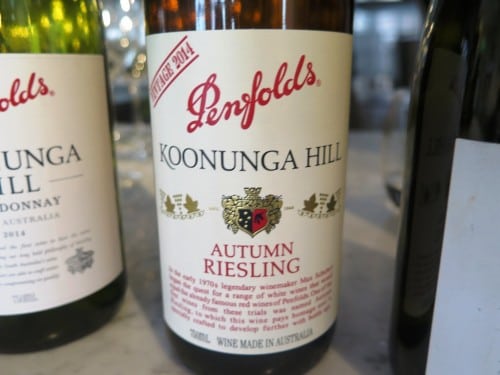 The retro-packaging references Penfolds’ finest Riesling parcels which, in the early 1970s (the height of Riesling’s popularity), were bottled under the Autumn label.  Back then, unless a bottle was labelled Rhine Riesling, it might not have any Riesling in it at all – perhaps Crouchen, Palomino, or maybe Traminer, which represents 7% of Autumn in this vintage.  This vintage is 100% sourced from Penfolds’ Woodbury vineyard at 450-550m in the Eden Valley, which faithfully delivers the citrus and mineral profile associated with this region’s Riesling.  But for those who find classic bone dry Australian Riesling a tad austere, the Traminer (and a barely detectable trace of residual sugar – 3-4g/l) helps to round out/soften the palate of this entry level white and brings an attractive touch of Turkish Delight fragrance too.  It’s not a keeper but it makes for an interesting, still finely honed quaffer at £8.62 at Corking Wines.

As Julie Andrews might say, “let’s start at the very beginning, a very good place to start” and so it is with Penfolds’ Chardonnay range.  It’s a while since I tasted Koonunga Hill and I was impressed to see how much it has benefited from Schroeter’s work on the top wines.  For a start, when he refers to warm climate fruit he is actually talking about just a splash of McLaren Vale Chardonnay. Otherwise cooler Limestone Coast (Padathaway, Robe) and Eden Valley fruit feature in a wine which, at one time,  would have most certainly included more McLaren Vale fruit, Barossa Chardonnay too.  With earlier picking it weighs in at a modest 12.5% alcohol and, though softer and more approachable than its older siblings, with rounder melon as well as zippier lemon fruit, it still has something of their flintiness and freshness.  For the entire Chardonnay range Schroeter explained that he is looking for “a line of acid with lots of flavour wrapped around that acid.”  The oaking is gently supportive, contributing to this wine’s decent length and bringing hints of cashew to the party (this wine is aged for 6 months in stainless steel and seasoned French oak).   Very well done.  £8.75 at Corking Wines. 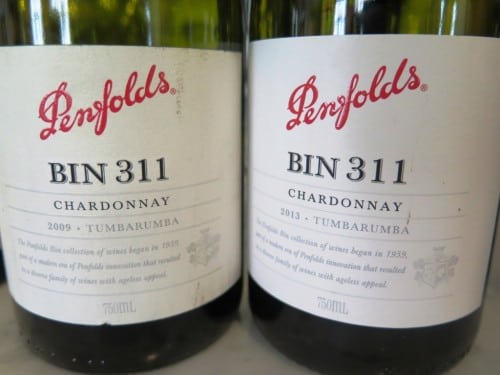 I’m a fan of Tumbarumba Chardonnays.  From elevated, seriously cool climes (many plantings were originally focused around sparkling production), they tend towards austerity.  Bin 311 is sourced from a single region each year and focused around a cool climate, tight style (e.g. Orange in 2007, Henty in 2011). Fruit in Tumbarumba is sourced from long term growers with parcels at 700-750m above sea level.  The 2009 has a flinty nose with the extreme curry powder notes I sometime find with super-flinty wines (and when you bash together silex/flint from some Loire vineyards).  In the mouth its age shows in terms of flavour profile (nutty) and texture (a touch oily), but the region’s acidity wins through on a firm finish.  A savoury, mineral expression.  A touch lean for me despite the barrel ferment and lees derived texture/complexity.  13%

A warm, dry, low yielding year produced an expressive Bin 311 with blossom notes and citrus to the nose and bright, crisp green apple and lively grapefruit to the palate.    Schroeter’s signature savoury, textural wrap adds complexity and texture – initially chalky then, on the finish, pillowy lees with an incipient nuttiness.  The oak (seasoned French) is very much in the background.  Going back it shows a touch of flintiness.  13% £30 at Berry Bros & Rudd 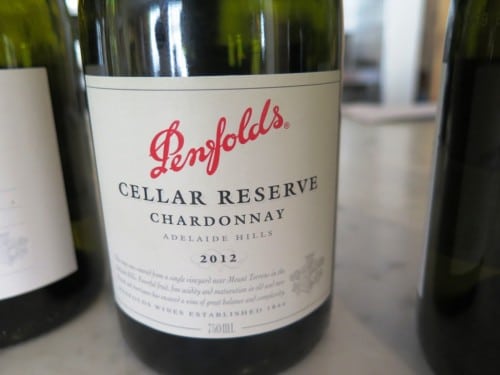 To my mind, Penfolds’ Adelaide Hills’ Chardonnays have much more conviction than their Tumbarumba wines – with greater fruit intensity, they carry off their “wrap” with great aplomb.  The Cellar Reserve is a small batch wine based on special vineyards and micro-sites.  In this vintage (regarded as exceptional for whites) it came from a single vineyard near Mount Torrens, a relatively warm site planted to Bernard clone 76.  The balance went to Reserve Bin 12A.  True to Penfolds’ shtick, there’s no reference to the vineyard on the front label though Schroeter says he’d quite like to credit the grower on the back label.   I ask how this wine is differentiated from the Reserve Bin Chardonnays (which also come from Adelaide Hills).  For Schroeter the Cellar Reserve Chardonnays are not as intense or textural as Bin A for which he always reserves one “bloody stinky,” heavily (but cleanly, meaning no mercaptans) sulphidic barrel which, he adds, “will go a long way.”  Sure enough,  the lime spiked white peach fruit and not the solids/sulphides principally inform the nose, texture and flavour of the Cellar Reserve.  The flint is, if you will, on the backfoot, which also allows this Chardonnay’s subtle floral notes to come through. In common with the other Chardonnays, the oak (43% new, all French) is worn lightly, bringing a deft touch of spice to the palate.  Lovely length and line with savoury lees notes to the lingering finish.  €61 at Voyageurs du Vin

For this sell out vintage which cleared up on Australia’s wine show circuit, Schroeter pushed the sulphides to the limit.  Pointing out that they grow in bottle (especially under screwcap) as the sulphur dioxide on bottling dissolves into the wine, he uses double the amount some use at bottling.  It has emphatic struck match to nose and palate with steely, taut grapefruit, great length and a youthful chalkiness of texture going through (remarkable where it undergoes 100% malo).  Still very impressive (if this style appeals) and tight, edgy even.  Though it was aged for just 9 months in French oak barriques (62% new), Schroeter is as picky about his oak as he is about his fruit having undertaken extensive oak trials (and ongoing).  Saying “I’m pretty much set in my oak regime,” he describes Tonnellerie Dargaud & Jaeglé as “the backbone” of Yattarna and Reserve Bin and is also keen on Tonnellerie Saint Martin.  At £45 at Hailsham Wine Cellars I don’t think this would still be on the shelf Down Under! 12.4%

A quieter nose than Reserve Bin 09A, with riffs of lime peel, struck match and the tiniest whiff of rotten eggs.  The palate is a little pinchy with contrapuntal pith (stop) and acid (go).  A very pronounced whetstone minerality permeates its steely grapefruit, juicy golden delicious and rounder white peach fruit. Not as racy or taut as the vintages either side, which I preferred.   It was matured for 9 months in French barriques, 72% new.  £60 at Majestic 13%

Flighty is the word that springs to mind for Reserve Bin 12A, such is its lift. And, so racy is it, it feels almost elusive! Lemon and lime jangle enticingly on the nose and follow through on a very vibrant palate together with steelier grapefruit.  A rapier-like undertow of acidity carries a super long sabre-rattling finish with great resonance of struck match and spicy toast (it was aged for 9 months in French oak barriques, 53% new).  Wonderful intensity and structure – loved its fine, energetic frame and focus.  My pick of the three.  Catch it if you can at Corney & Barrow at £309.48/6 bottles.  12.5% abv

Impossibly young looking, still with a greenish tinge not to mention a Duracell bunny palate of great line and length which just goes on and on and on. And tastes good, I should add, with a firm, very pure, seamless muscular medley of citrus, stone fruit and mineral notes.  It is a blend of Tasmanian (87%) and Adelaide Hills fruit aged for 9 months in French oak barriques, 49% new.  Very good indeed.  £62.40 at Excel Wines 13.3%

With a third each of Tasmanian, Henty and Adelaide Hills fruit in 2012 (yields were down in Tasmania), this is a more langorous, creamier Chardonnay with round white peach, firmer grapefruit and slate minerality.   The oak is well integrated (it spent 8 months in French oak barriques, 45% new) and, as you’d expect from Penfolds, it’s very well made – a satisfying Chardonnay, if a little lacking charisma at the price (I’d buy two Reserve Bin 12As instead!)  I prefer the more muscular, linear style of the 2008, so I’m very much looking forward to tasting the 2014 and 2015 vintages which include Central Tasmanian Highlands fruit!  13.2%  £105/bottle at Laithwaites, £120/bottle at Edgmond Wines, £124.60 at Hedonism