A visit with First Drop at Home of the Brave, the Barossa – another revolution

Former St Hallett boys Matt Gant (winemaker) and John Retsas (marketeer, pictured) are “the players” behind First Drop wines.  With a Shiraz named Mother’s Milk and a Cabernet called Mother’s Ruin, I reckon Dr Freud would have plenty to say about the pair.

But personal psychology aside, there’s no question that they’re helping kick into touch any number of preconceptions about Australian wine.  So there’s no kowtowing to tradition or 100 point Behemoths in this camp.  It’s all about pushing boundaries varietal and (sub)-regional and tickling both ribs and taste buds with innovatively packaged, generous but drinkable “slurpy” wines which are expressive of place and region.  Pretty neat prices too.

Their confident range plays fast and loose with a heap of alternative varieties,  Iberian and Italian – an Adelaide Hills Arneis and Barossa Sparkling Trincadeira are but two examples.  It also encompasses three Barossa single vineyard Shiraz, each from a different district (Ebenezer, Seppeltsfield and Greenock) and, at the pinnacle, The Cream Shiraz, a traditional Barossa Valley district blend.

Former St Hallett boys Matt Gant (winemaker) and John Retsas (marketeer, pictured) are “the players” behind First Drop wines.  With a Shiraz named Mother’s Milk, I reckon Dr Freud would have plenty to say about the pair.

But personal psychology aside, there’s no question that they’re helping kick into touch any number of preconceptions about Australian wine.  So there’s no kowtowing to tradition or 100 point Behemoths in this camp.  It’s all about pushing boundaries varietal and (sub)-regional and tickling both ribs and taste buds with innovatively packaged, generous but drinkable “slurpy” wines which are expressive of place and region.  Pretty neat prices too.

You’ll find First Drop wines at The Settlers Tavern, Margaret River, which has won The Gourmet Traveller Best Pub Restaurant List three years running.  Co-owner Karen Gough is a fan and the name came up when I interviewed her recently for a feature on Barossa Shiraz.  Her description of Mothers Milk Shiraz nails the First Drop style, which she describes as “soft, textured, balanced – not a sledge hammer – a good example of the diverse expressions now being produced in the Barossa –  its really so juicy you can drink on its own.”

Here are my notes on the range and make sure you check out their website.  It’s fun and informative and I particularly like the fact that their technical fiches provide information about the vineyards from which the wines are sourced.  It really gives the lie to the idea that the Barossa Valley (and its wines) are one dimensional  – as my July trip brought home, it’s not just a ”floor.” Single vineyard ranges like First Drop’s 100 case Fat of the Land label, first made in 2005, really help to lift that off the page.

This wine is sourced from two vineyards just over the Barossa GI borders in Kersbrook (c. 8 year old vines) and Kupito (c. 10 yo vines).  It’s subtly perfumed, bright and silky with ripe citrus and pear fruit and a touch of fennel going through the finish.  Though its ripe acidity and fruit intensity give it an Australian thumbprint, its freshness, lightness and flavour spectrum reveal good varietal typicity too.  I subsequently enjoyed a glass or two over lunch at Harvey Nichols in Edinburgh – perfect with fishcakes and homemade tartare sauce.

Gant came across this varietal blend while working stints at Ceretto in Piedmont and, recognising that the addition of Barbera made for a more drinkable wine better suited to the Australian palate, came up with The Big Blind, a blend of 65% Nebbiolo and 35% Barbera.  Sourced from Caj’s vineyard  at 340m above sea level near Kersbrook in the northern Adelaide Hills there’s plenty of varietal typicity here from its palish ruby/garnet hue to its roses, savoury liquorice and incense spice (the Nebbiolo) to its sweet cinnamon-edged fleshy core of plum (the Barbera).  Aged in older French oak barrels for 15 months, the tannins are ripe but present.  Lots to like about this.

No prizes for guessing the varietal split but you could equally call this wine body and soul.  The Shiraz brings the body – a generous mid-palate of sweet ripe but juicy red fruits, while the Monastrell, the soul, gives a little more food for thought with its savoury leather ‘n spice and firmer tannic presence.   It’s aged for around 18 months in 100% French oak, around 10% new.  Good texture.  Well done.

Though it’s a little callow at this early stage, there’s an appealing classicism to this early-picked Cabernet which Retsas describes as “an ode to traditional lunchtime claret.”  A violet scented nose and palate has a juicy core of cedar dusted blackcurrant fruit with an attractive stalky edge and sweet vanilla notes.  The finish is a touch grippy in a good way.  With a bit of bottle age, I expect this will show a bit more spit and polish without losing its edge.  Hope so, I like its corners and lack of obviousness.

It’s off to the Adelaide Hills again to Caj’s vineyard near Kersbrook for another Italy meets Australia wine, this time a Montepulciano.   Soft, round and succulent initially this inky violet-scented red seems a bit of a smoothie with its sweet core of summer pudding fruit, but zingy bright bilberries and hint of dried herbs make for a juicy, persistent, pixelated finish.  Super drinkable.

With its black olive and mocha edge black currant and berry fruit JR Gantos smacks of a more trad McLaren Vale Cab, but then  5% Touriga Nacional brings a touch of lift with its rock rose perfume.  Maybe it needs time, but the wine seemed to slip, as it were, between two stools so I failed to get a hold of it or it of me.  One to review.

From just south of Rosedale in the south west of the Barossa this is one of the first vineyards picked and Retsas and Gant like to pick Tempranillo early “to get the florals and tannins in balance.”  It’s a plush but well balanced wine with sweet vanilla edged plum, earthy raspberry fruit and violet top notes.  Though aged in French barrels (40% new) for 24 months, the oak is well integrated and tannins long and supple.   Seductive.

First Drop make 6 different styles of Barossa Shiraz.  For Retsas, their common ground is drinkability – he says they definitely don’t want to make high octane styles; elegance and restraint are the watchwords.  No more so than for Mother’s Milk,  the baby of the range, which he describes as “a soft, slurpy, textured expression of Shiraz.”   Mostly sourced from 4 vineyards in Gomersal, Greenock, Ebenezer and Seppeltsfield, districts renowned for the richness and balance of their fruit, it’s deeply coloured.  With an enticing blueberry perfume, it’s as the man says, with lashings of bright, juicy blackberry and cherry fruit and smooth as tannins.  Aged for 12 months in French oak (5% new).

The dos percentos takes the form of  2% Tempranillo which Retsas says “fleshes out the mid palate and gives high tone aromatic lift but, unlike Viognier, doesn’t give those florals/apricot notes.”  With fruit drawn exclusively from the north west Barossa (Ebenezer, Greenock and Seppeltsfield), the so-called “power end,” it’s a deeply coloured brooding Shiraz.  An involving palate of inky black fruits, molasses, dark chocolate/mocha and warm earth is supported by ripe but firm tannins and vanilla oak (it’s aged in 50% new oak, 75% French, 25% US).  Powerful stuff.

Grapes are sourced from Shawn’s vineyard.  Just north east of Greenock in the north west of the Barossa, it’s located at 330m above sea level on clay with ironstone.  The wine is aged in new French oak on the lies for 24 months.  There’s a funky edge to the nose and a hint of rusty nail, soon forgotten as you’re steeped in waves of juicy mulberry, blackcurrant and blackberry fruit, star anise and sweet cinnamon.  Though chunky through the mid-palate, firm tannins make for a tapering finish and remind you there’s plenty of gas in the tank.  Resist temptation and hold onto this for as long as you can.

Grapes are sourced from Anthony’s vineyard.  The 20 year old vineyard in Ebenezer in the far north of the Barossa is located at 296m above sea level on deep red clay.  With big differences between the day and night time temperature, it’s a late ripening site and the wine is fulsome, rich and succulent with sweet perfumed blueberry and blackberry fruit and supple tannins.   The wine is aged in new French oak on the lies for 24 months and here, the fruit mops up the oak with ease.  Opulent without being overbearing, it’s a hedonistic treat; approachable now and will go for 10 years plus.

Grapes are sourced from Northy’s vineyard.  It’s located in a gully to the south west of Seppeltsfield in the west of the Barossa at 245m above sea level on clay over limestone.  Retsas tells me this relatively low site nonetheless enjoys cool nights because cool air is trapped in the gully.   Plushly upholstered with concentrated blueberry and mulberry fruit, long, lithe tannins carry a seemingly endless finish laced with heady coconut (35% US oak), amping up the hedonistic factor.  It effortlessly combines the opulence and structure of its predecessors and, though approachable now (with a knife and fork), I reckon it’ll keep going strong for 15 years plus.

The Cream is, as the name suggests, la creme de la creme – a barrel selection comprising fruit sourced from Seppeltsfield (43%) ,Ebenezer (29%) and Greenock (28%).  As they say, the whole (blend) is greater than the sum of its parts and The Cream is certainly more complex and ageworthy than the three Fat of the Land Shiraz.  Its dense concentration of tight knit but very juicy black currant and berry fruit is nuanced with dried sage, eucalypt and dried spice notes. The tannins are, as yet, chewy.  In terms of drinkability this youthful wine is positively unevolved.  In terms of the Barossa, it’s a postively evolved wine for its brightness and purity of fruit.  Do not touch for five years, then take pleasure watching it grow up over the next decade or two.

Retsas is not the only one to rate Cabernet in 2011, but he reckons that McLaren Vale has produced “the best yet – perfumed, elegant and lifted.”

The Arneis was picked early this year at 11.5 baume and Retsas says “it looks sensational.”

Nebbiolo was a game of two halves – the first pick great, but it became progressively difficult (click here for a video about the Adelaide Hills’ race with botrytis in 2011 which also explains why they’ll be no First Drop Chardonnay in 2011).

He describes the performance of Barossa Shiraz as “solid” but says they’ll probably be no single vineyard wines because “there just won’t be the concentration to make big styles.”  So expect Mothers Milk and Mothers Ruin to benefit from “declassified fruit.”

As I left the cellar, Retsas handed me a bottle of this wine, which is made in partnership with Tim Smith Wines.  Trincadeira is a thin-skinned Portuguese variety which thrives in the Alentejo’s southerly warm and dry climate.  First Drop’s winemaker Matt Gant has worked in the Alentejo at Azamor and, no doubt, swiftly cottoned on to the fact it just might work in the Barossa too.  Aside from the animating sparkle (!), it certainly exhibits similar characteristics to its sweet and sour palate, with savoury dried fig and sweet plum, a warm earthiness and, more Barossa, a touch of Kalua.  Six years in the making, the (old) oak-aged base wine was sourced from the 2005-2009 vintages and aged on lees during the second ferment in bottle for 18 months.  13.5%  I reckon a good partner for BBQ’d spare ribs. 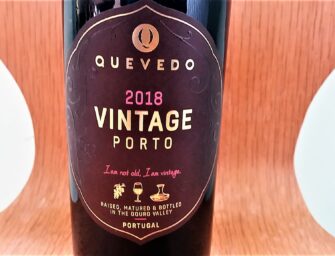 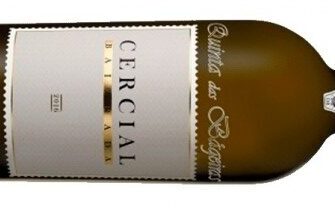 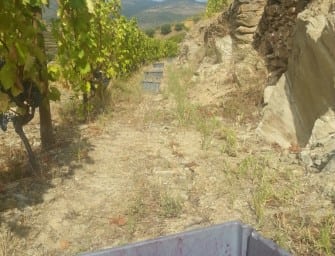 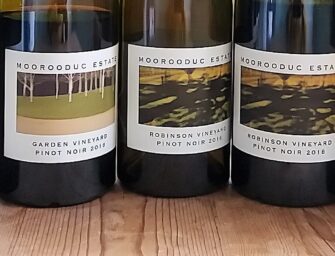 Hi Paul, thanks for the feedback. I'm not travelling so more limited tasting opportunities than usual - especially for the smaller players/quintas. If

Thanks for the feedback Leiv. You might enjoy this report on a Cape Mentelle vertical, back to 1993 - https://thewinedetective.co.uk/blog/margaret-river-cape-mentelle-cabernet-sauvignon-vertical-1993-2014