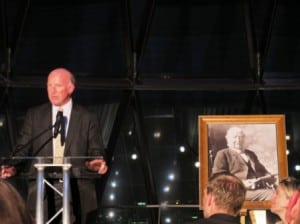 Just before I headed to Australia last month, I attended Hardy’s 160th Anniversary celebrations at the Gherkin.  Founder Thomas Hardy planted his first wines in 1853 and made his first wine in 1857.  The evening was presided over by Hardy’s great-great grandson William “Bill” Hardy (pictured with a portrait of Thomas Hardy).

As you can see from the reflection in the Gherkin’s domed roof, it was an impressive party, especially for the lucky handful who beforehand tasted verticals of Hardys’ iconic Eileen Hardy and three rare museum releases with Bill and Chief Winemaker Paul Lapsley.  Here are my notes on these wines which, said Bill, are a showcase for Hardys’ huge (and evolving) resource – the vineyards at the heart of its tradition for blending.

This iconic range (made only in top years) was created in 1973 in tribute to Eileen Hardy, who was awarded an OBE in 1976 for her services to the wine industry.  According to Bill, although it was suggested she might receive it in Australia, there was no stopping the 83 year old from coming to London to visit the queen!

Originally made to commemorate this spirited woman’s 80th birthday, the first Eileen Hardy comprised Hardy’s best red – a 1970 McLaren Vale Shiraz, which was labelled “Eileen Hardy Special Bin 80.” Since 1986 it has also comprised Hardys’ best Chardonnay and, since 2010, additionally its best Pinot Noir.

Over time the fruit sources for the Shiraz and Chardonnay have changed.  The Chardonnay was originally based on Padthaway fruit from the Limestone Coast.  Cooler regions have since been its mainstay, says Lapsley, “to get an extra degree of finesse” – the Yarra Valley (since 1992), Tumbarumba, at 800m (1996), Adelaide Hills (1998) and Tasmania (1999).  He adds, where Tasmania achieves 9g/l total acidity and a pH of 3.1 it has accounted for the biggest stylistic shift.

For Lapsley, Tasmania brings lemon pith and white button mushroom notes together with great acid drive, the Yarra Valley a mealy nuttiness and Tumbarumba rapier-like acidity with melon and stone fruits.  All the vintages shown were whole bunch pressed and wild fermented on “just hazy” solids. Incidentally, though now sold out, the 2009 Eileen Hardy Chardonnay (not tasted) was stocked by Majestic and priced at a very reasonable £25 (or £20 on their current fine wine £10 off when you buy two bottles deal).

As for the Eileen Hardy Shiraz, since 2001 it has come full circle back to a 100% McLaren Vale after a period of inter-regional blending (between 1995 and 2001 there was a steady decrease in reliance on Padthaway and an increase in fruit from regions such as Clare Valley and Frankland River).  The other major stylistic shift has been the phasing out of American oak (the wine now sees 100% French oak).

Subtly smoky, well-integrated oak with a touch of struck match and saline on the nose, all of which follow through on an extremely youthful palate.  It’s exceptionally tightly focused with great limey acid drive, zingy citrus fruit and a hint of cashew; as it opens up there’s a suggestion of sweeter, fleshier stone fruited delights to come.  The acidity pushes out a long, long finish. A thoroughly modern Australian Chardonnay. Impressive.

A toasty, nutty nose and palate – a little cheesy even – wed to a slippery, stone-fruited palate with ripe lime zest and sweet vanillin/white chocolate.  Firm acidity seems a little more youthful than the palate, which is a touch more developed than I’d expected, perhaps reflecting the warmth of the year?  Doesn’t quite hang together for me.

From another warm year this is a powerful, complex wine with layers of ripe peach, vanilla oak, flint and sweet, nutty, leesy flavours.  The whole is deftly corseted by ripe but present acidity, which keeps the corpulence in check.  Very good.

Reflecting a very cool year this is a long, elegant Chardonnay with a very attractive purity of cool white orchard fruits and lively grapefruity acidity.  The oak is beautifully integrated.  All in all, still in very fine shape (and notwithstanding it was the only wine under screwcap).  Impressive.

Very bright and fluid in the glass and in the mouth with a delicious purity of just crushed raspberry and red berry fruits to nose and palate.  Liquorice spice, a lick of malt and loamy, earthy chocolate undertones bring layer and complexity.  With velvety tannins, the finish is smooth but textural.  Very fine.  Highly polished winemaking showcases the beautiful fruit.

A much deeper hue and, no surprises for this low yielding frost and drought-struck vintage, much denser in the mouth with a tarry, leathery edge to its fruit, a certain viscosity and butch, slightly drying tannins.  A huge contrast with the 2010, which is much my preferred style (and, to be fair, from a much better balanced vintage).

The bandaid/iodine notes of brett marred this wine.

Hurrah!  A terrific vintage and a terrific wine with a great concentration of fleshy, juicy plum, black currant and berry and strapping tannins to match. Firm and ever so youthful, it retains great line; a touch of lift too with just a hint of mint to its long, involved finish.  (A blend of McLaren Vale, Padthaway and Clare Valley).

I’ve been a little spoiled with museum releases in September (click here for my notes on Yalumba’s Museum Release tasting).  It all started with these three from Hardys:

Labelled Burgundy perhaps because some of the fruit was sourced from the Hunter (Tullochs), the balance from McLaren Vale.  Pale garnet and much more evolved on nose and palate, indeed somewhat dried out/sherried. Shame.

Not the original label, or perhaps it never had one?

I was completely bowled over by this wine and have since looked up its maker, Roger Warren.  I’m quoting here from Andrew Caillard MW’s insightful piece about Australia’s legendary wines and winemakers on the Langton’s website here:

“Roger Warren (1905-1960) is regarded as one of Australia’s most important winemakers during the 1950s. He is always mentioned along with Maurice O’Shea, Colin Preece and Max Schubert as pivotal figures of the modern Australia wine industry…. it is probably the small Private Bin wines that truly encapsulate his greatness. This micro-production wines were generally Claret style wines based significantly on Cabernet Sauvignon from a “small central strip of vines running down the hollow which creases lower Tintara.” The vineyard was planted by Dr. Alexander Kelly at his property “Tintinara” – later shortened to Tintara in 1861. These wines were often blended with some other material usually from the Purbrick family at Chateau Tahbilk or Bill Redman in Coonawarra.”
Here’s my note on this exceptional Cabernet.

Great depth of colour compared with the other museum releases gives the Cabernet away (and the greatness of this wine).  It reveals a gamey, sweet, kid glove leather Rioja-like perfume with liquorice on a thoroughly enticing nose.  In the mouth, initially it’s surprisingly chunky – all bluff and bluster with pronounced blackstrap liquorice.  But as this fades, it builds purposefully in the glass to reveal a second wind of juicy, wonderfully vinous mulberry and cassis, then a third wind of dried roses and cedar.  Haunting as they say.  A great privilege to taste this.  What a wine! Wow….[now speechless].