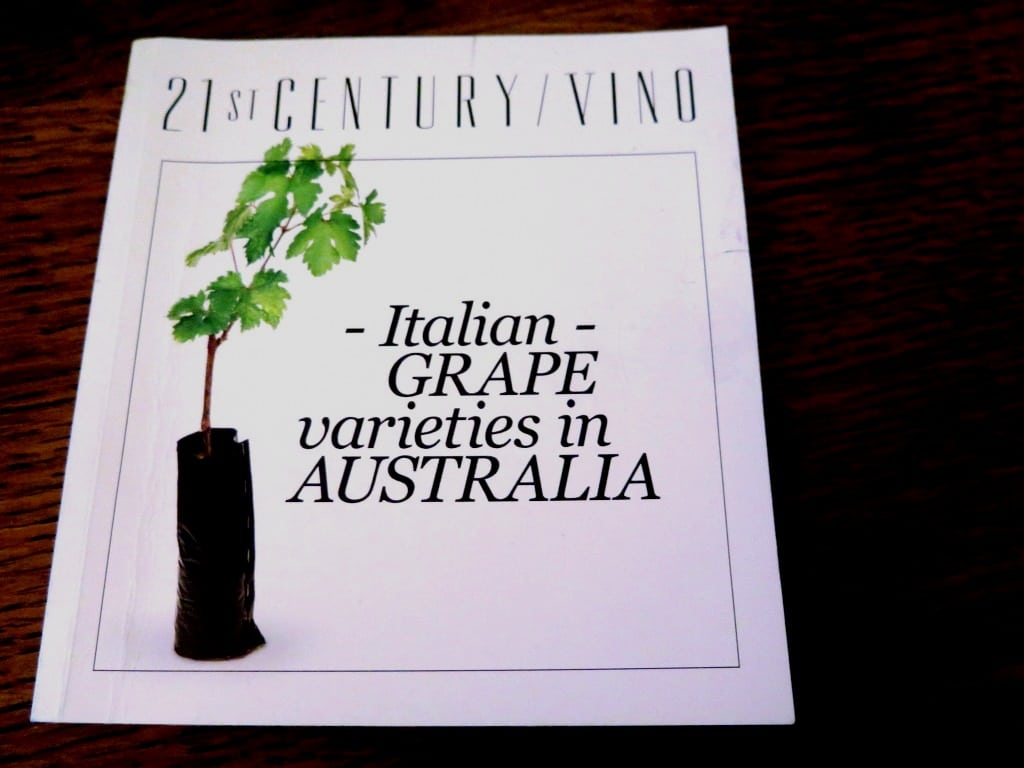 21st Century Vino Down Under: the Italians are coming 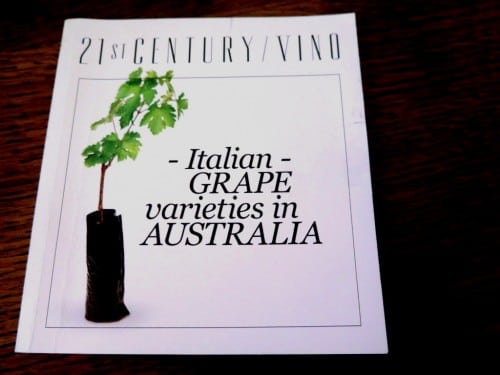 Several years ago Max Allen, a leading writer on Australian wine, presented a tasting of Australian so-called alternative varieties (Italian, Spanish and more obscure French varieties as a recall) alongside European examples.  Back then the wines were pretty ‘safe.’  As the latest London foray – September’s 21st Century Vino tasting – confirmed, these days it’s almost the exact opposite. Australia’s alternative varietal wines are pay attention to me wines.  And they merit attention.

I reckon most of these drink and think 21st Century Vino wines had no or low adds (yeast, acid, new oak) and little in the way of subtraction (i.e. were unfiltered and unfined). Australian alternative varieties have served as a lightening rod for a new approach to winemaking.  One which values food-friendly structure and texture as much as fruit and, most definitely, over oak.  Turning the clock back 14 years, Liberty Wine’s David Gleave MW (a panel speaker) recalled a “bad case of tannin-phobia” while judging in Australia.  The Australian and Italian specialist importer is thrilled to see a younger generation “looking for tannin and acid carrying through on the palate.”  The no adds and subtracts process certainly added another dimension of interest to this tasting, if sometimes a little too much edge for me. 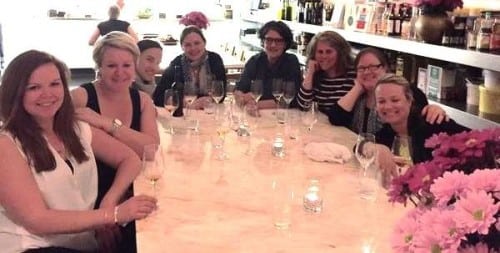 The whipcrackers behind the event were Kim and Tennille Chalmers (grape growers and wine makers), Jane Faulkner (Chief of Judges at the Australian Alternative Varieties Wine Show, where she succeeded Allen) and Walter Speller, an authority on Italian wines and international judge at last year’s A.A.V. Wine Show.  Borrowing from Faulkner, the Chalmers are “the modern day equivalent of James Busby.” By the mid-nineties, the sisters’ parents Bruce and Jenni had established Australia’s largest vine propagation business and nursery of 35 alternative varieties (70 clones) – many the first to reach Australia.  Their daughters created the brand 21st Century Vino with Chalmers’ network of growers and producers.

Doubtless the Chalmers’ improved clonal material has played a major role in the improvement of the alternative varietal breed.  Of all the Italian varieties, Sangiovese appeared relatively early in the piece but, said Gleave ruefully recalling his involvement planting a Heathcote vineyard (Greenstone) 15 years ago, only two out of 12 clones worked.  Some, he said, “were dreadful and didn’t adapt to the environment or the soil,” even though the mean temperature in the growing season was “pretty well the same as Gaiole in the Chianti region.”

But it’s not all about the C word.  For Bellwether’s Sue Bell, a deep thinker, it’s about the G-spot too (that’s my paraphrase, not hers)!  In her own words the improvement “is also about growers saying these are the varieties we should grow here.” And, she speculated, “maybe they needed to take control again rather than taking orders”.  It’s interesting to hear that coming from Bell who, prior to setting up on her own, was the senior winemaker at Stonehaven, Padthaway when it was mothballed by Constellation (now Accolade Wines) in 2009.  As for the Chalmers, they sold the nursery business in 2008, planting alternative varieties afresh in two ‘G-spots’, Heathcote and Merbein, Victoria.  These days, the family are following through their pioneering work from vine to glass with their own eponymous label.

Introducing one of the panel tastings, Speller explained that his spur to judge at the A.A.V. Wine Show was to explore the commonly held idea that Italian varieties don’t travel as well as their French counterparts.  He has written about his findings on Jancis Robinson’s website here, which report includes background to their introduction and subsequent growth down under.  Suffice to say that Speller was excited by what he found – “the Italian Miracle.” Because guess what?  It turns out that the Italian varieties are rather good travellers after all, though not everyone can be a Ferrari of course!

Faulkner reckons that the grapes with potential Ferrari pzazz are Aglianico, Nero d’Avola and Fiano. Speller similarly rates Fiano and Nero d’Avola and, “wishful thinking,” Nebbiolo.  For Gleave who confessed no grape gives him more pleasure than Pinot Noir, Nebbiolo just might make it given Australian Pinot Noir’s evolution this last 20 years.  After all, he winningly pointed out, we are in the business of pleasure.

On a short leash, I didn’t have the time to taste everything, but here are my highlights: 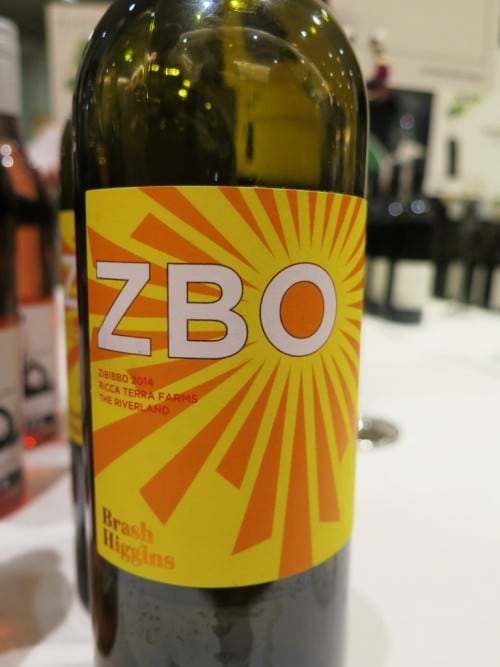 Terrific spice to the nose and vivid colour pop (just like the label) palate of this textural, firm, dry take on Zibbibo a.k.a. Moscatel/Muscat.  Loved the exuberance of its zingy flashes of citrus – orange, orange peel and marmalade.  Orange three ways!  One of my stars of the day. 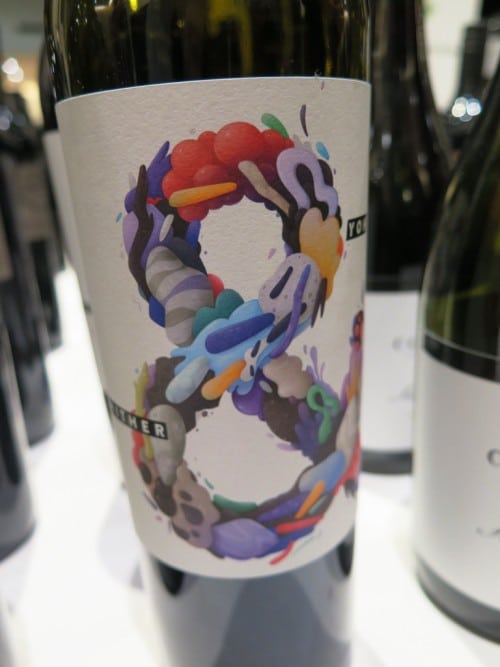 The first of two cracking Aglianico.  It’s a favourite grape which I sort of bunch together with Piedmont’s Nebbiolo and Portugal’s Baga – capable of wonderful aromatics and butch tannins – hopefully with enough fruit to join the dots between nose to tail.  Very spicy with leather and inky florals to its plum and red berry fruit; ripe but present tannins and persistent acidity make for a well disciplined, serious finish. 12.6% 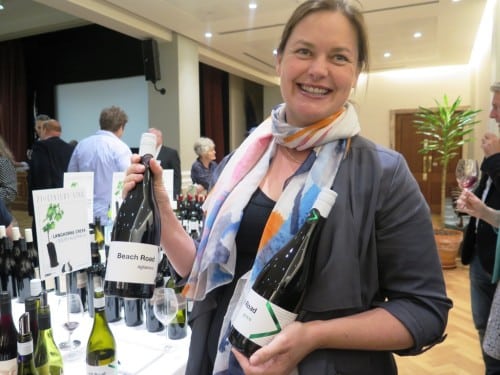 More generous than the Hither & Yon with rich, chunky black berry fruit, those inky florals, juicier black olive (rather than leather) savouriness and sinewy tannins to keep its feet on the ground.  Lovely balance, texture and interest.

I enjoyed meeting Kim and Tennille Chalmers.  Being very dynamic, cutting edge 21st Century gals, they’re much more likely to use terms like “bucketwine” over Busby’s ever so 19th century lingo – “mucilaginous” anyone (a term Australia’s “father of wine” used to describe Carigan)?  You can read more about their bucketwines here but, essentially, they are super small batch wines trialling new varieties, techniques and harvest dates –  the first 2012 batch sold out in 17 minutes!  For Chalmers, “bucketwine gave us a reason to justify our R & D programme to the market.”  And indeed to switch gear and get beyond the prototype for some styles/varieties.  Being one such graduate of a bucket wine, this dry Moscato Giallo is at the very coalface of 21st century winemaking Down Under.  The Chalmers aim was to showcase the variety in a different light from the cheap and cheerful Asti style “which sells itself.”  So what of the wine?  It’s intensely perfumed, for some (me included) a little too soapy (not uncommon with Moscato), but there’s bags of interest in its lavender, ginger and cardamom infused palate – the latter for its textural as well as aromatic qualities.  To that list I’ll add Chalmers’ astute description – lemon verbena.  It was made from just under a ton of grapes.  The wine was fermented on skins until it dry then sulphured. 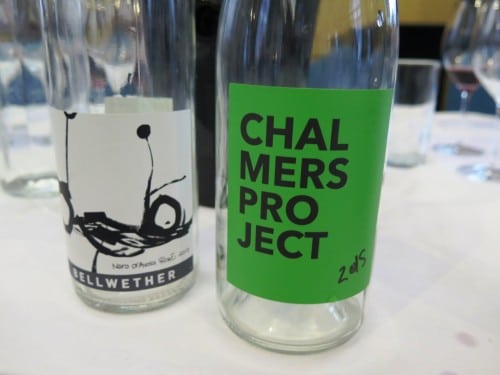 Bell, impressed me a couple of years ago with her beautifully perfumed Coonawarra Cabernets. But this traditional Aussie strength is far from the only string to her bow.  This Nero d’Avola comes from Bell’s Ant Series range, a.k.a. her climate change range, which is about working with growers who are mindful of the sustainability of their varietal charges.  She is a firm believer in Nero d’Avola’s camel-like abstemiousness – it’s much less thirsty, she told me, than Australia’s ubiquitous French varieties.    To flesh this out, Bell put me in touch with leading viticulturist Ashley Ratcliff who grew the grapes at his Ricca Terra vineyard.  Based on his first hand experience of the variety in the Riverland (annual rainfall a measly 300mm), he reckons that they used no more than 2.5ml/ha irrigation water for the Nero d’Avola versus 5.5ml/ha for varieties such as Chardonnay and Shiraz. While the vine may not be thirsty, this pale wine is thirst-quenching.  Crisp, dry, spicy (helped by a splash of Pinot Grigio) and tangily fresh, it’s impressive for a wine from this warm dry region which required zero acidification – another Italian varietal bonus .  Though made to drink young, I reckon it grow into itself nicely with a few months more bottle age, becoming a touch more savoury and textural.

A textural, taffeta-layered Nero d’Avola whose richness is very true to its regional and varietal roots.  Black olive, raisins, bitter chocolate and Campari/dried herb notes abound on an expressive, round palate.  Super-drinkable. 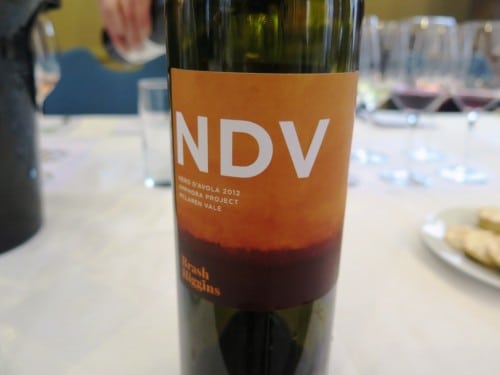 Drier, firmer and spicier with some plum slivovitz volatility, a saline edge and a touch of pure Aussie mint.  Less immediacy than the Scott & La Prova, this will be too edgy for some.  It was growing on me as it opened up.  I’m going to record an open verdict.  Would have to sit with it for longer and try it with food.  But again, most definitely interesting. 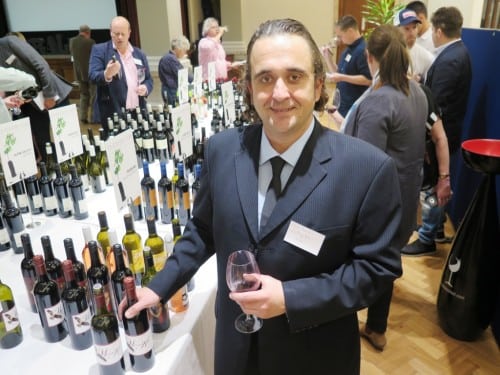 From the Barich family’s certified biodynamic vineyard this is a very attractive Montepulciano, rich and plummy in hue and on the palate, with fleshy, almost creamy fruit, an attractive undertow of earth and liquorice and ripe but present textural tannins for frame.  Not especially long, but with lots of layers of flavour packed in, I reckon this is great going given the family launched their first wines in 2010.  That said, their experience as growers (since 1977) shines through, on which note I was amazed to hear that the fruit was picked as late as 6 May!!!!

A very different kettle of fish from the Whistling Kite, more savoury and mineral, with a brush of tannins.  It has a silverside/bloody, rusty ironstone tang, mulchy fenugreek and minty Moroccan tea notes to its plum fruit.  Interesting in a good way –puts me in mind of some great terroir-driven Shiraz I enjoyed on my latest visit to South Australia.

Winemaker Bryan Martin is perhaps best known here for Clonakilla wines – he is Tim Kirk’s assistant winemaker.  This is a wonderfully firm, fresh Sangio.  Powdery tannins underscore and tease out its bright, lifted fruit.  Subtle riffs of tea and leather bring nuance and texture to the finish.  Not a bit over-worked – great work! 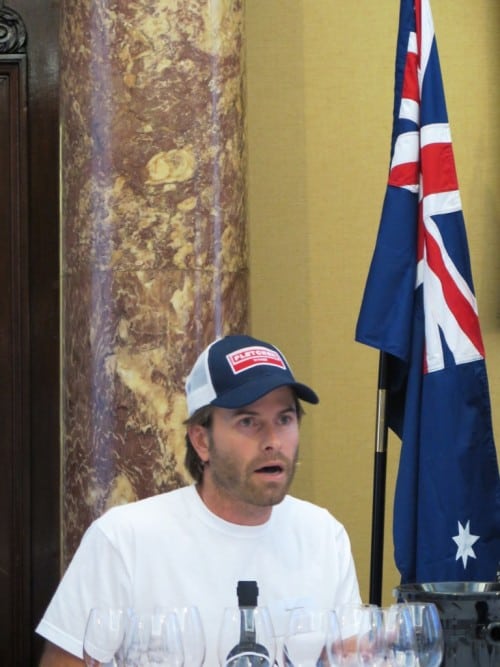 Dave Fletcher – flying the flag for Nebbiolo in Australia

Dave Fletcher loves Nebbiolo – in addition to this wine, he also makes a Barbaresco in Piedmont.   The winemaker reckons that the variety has to be in the ground 10 years to get the right tannin profile.  In Piedmont he sees the variety flourish in conditions “peculiar to Piedmont” – the right humidity, soil and weather patterns, for example.  Which means that, when it comes to making Nebbiolo in Australia, “the only way to do it right from beginning was to block Piedmont out of my head.” The stand out difference between his Australian wines and Italian wine is the tannin structure.  He believes that Australia’s aged soils and sun intensity in the early stages of the ripening process play a part in this.  I liked the slow burn tannins of his wine – they crept up on me, just like the subtle flavours of this wine which, initially seemed a little hollow.  Going back those tannins carry delicate dried rose notes and spice.