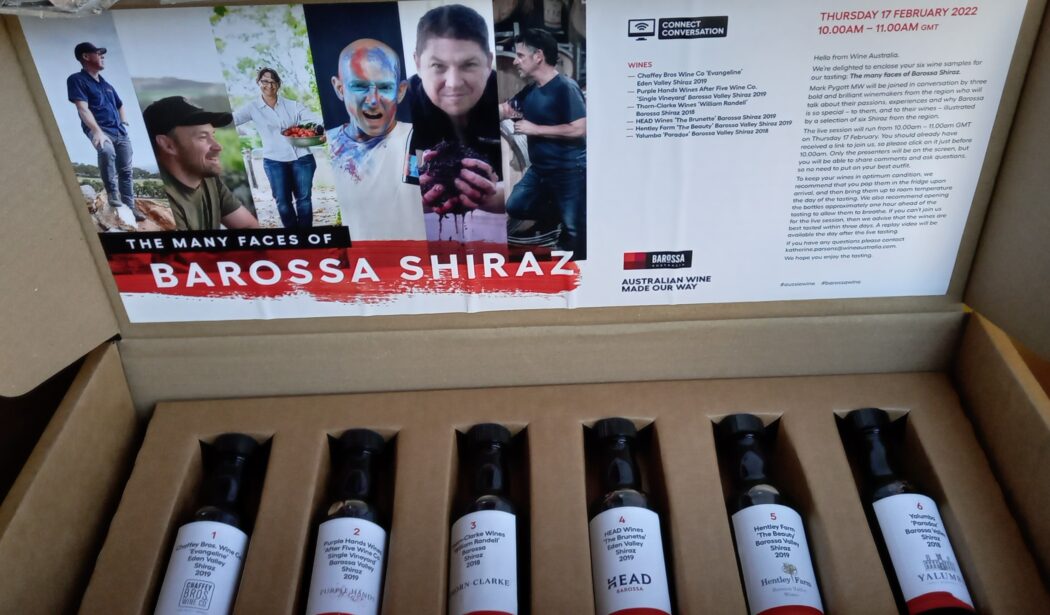 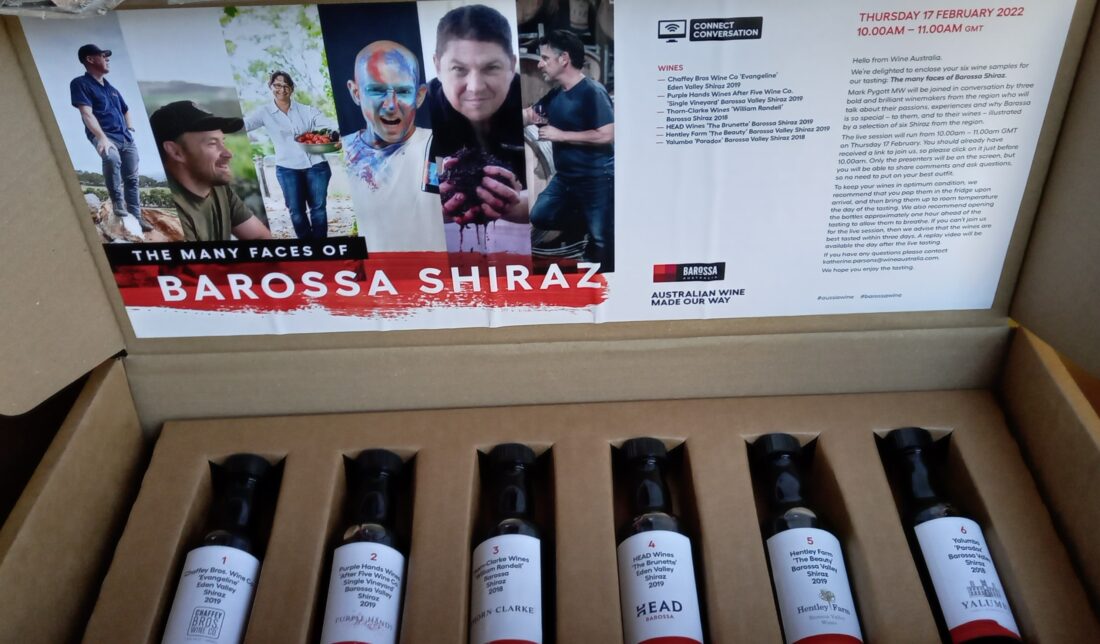 In Wine Australia’s latest webinar entitled “The many faces of Barossa Shiraz,” Mark Pygott MW focused on the role of the people, as opposed to the many places recently explored by a region-wide project known as Barossa Grounds.

As its extensive in-depth website suggests, The Barossa Grape and Wine Association (BGWA) is nothing if not dynamic, not to mention well-resourced.  The South Australian region is among the world’s best-known generic regional brands, but no-one can afford to remain complacent these days.  A 2021 Wine Intelligence study of regular Australian drinkers found a four percent drop in awareness of brand Barossa over the last six years.

For Amanda Longworth, Head of Brand and Destination Marketing at Barossa Australia, bringing the growers to the forefront has “increased the depth of the story.”  As this tasting illustrated, the stylistic diversity of Barossa Shiraz goes beyond fruit source as new and old brands alike explore the genre and seek to remain relevant to today’s consumer. As Chaffey Bros.’ Daniel Hartwig put it, “if you drive forwards only looking in the rear-view mirror, you are going to crash.”

The regional body has now launched a Single Vineyard Register to highlight what makes a vineyard worthy of bottling solo. On articulating site expression, the discussion highlighted a familiar topic – the importance of earlier picking dates (or an earlier picked component), which also pays dividends for balance, vibrancy and longevity.  Qualities which, the winemaker panel discussed, enhance fruit forward approachability without necessarily detracting from age-ability.  Indeed, higher acidity can enhance age-ability.

Barossa Grounds – from 12 to five Returning to the question of provenance, let me update readers on the Barossa Grounds project.  In 2008, 12 potential sub-regions or ‘parishes’ were put under the microscope.  After a decade of analysis, it concluded that three distinctive Grounds within the Barossa Valley Region existed – Northern Grounds, Central Grounds and Southern Grounds.

Each wine shown was tagged with these broader categories and I have included this information in my reviews below.  You can find out more about these areas here.

Barossa tastings often focus on old vine material which the BGWA has catalogued according to its pioneering Old Vine Charter. Strikingly, this tasting did not.  I enquired if young vine material also has an impact on freshness and the relatively open weave of some of the wines (berries are often bigger, producing more juice/acidity).

Alex Head, whose wine was represented in the session, came back to me afterwards.  He confirmed that younger vine material does give larger berries but, with less tannin, less structure, less texture, less length, he said he’d not choose a young vine to bring freshness to a blend. “You just have to pick the older sites earlier,” the winemaker told me.

Head also shared what he is doing on the clonal front.  Currently, he works with up to 15 different clones across all vineyards (chosen for mainly for the quality of the site/grower, not the clones, he added).

The winemaker believes that clonal differences will not matter too much during the first 20 years of a vine’s life.  However, Head does notice “clones helping within a larger vineyard of older (30-year-old) Shiraz blocks.”  Having just started working with a 35-year-old vineyard with 15 clones, he is excited to see how complex the blend might be because of the clonal mix.

He has also started working with the growers “to plant a mix of what we see are the best clones for the wine style we are looking for – they will obviously promote differences in the final wine in time.”

Below are my tasting notes, each preceded with information about the vineyard and winemaking.

Fans of Barossa Shiraz may also enjoy these profiles/reviews I wrote for Decanter:

Henschke 2016 releases, including The Congregation of the Ancients: Hill of Grace, Mount Edelstone & Hill of Roses (Decanter Premium, 31 March 2021)

From a vineyard at 410m on shallow sandy loam soil over clay, gravelly throughout, with quartz, granite and schist.  The vines are 26 years old (clones 1654 & BRVC12).  It was fermented with 11% whole bunches and aged for 18 months in French oak puncheons and hogsheads.

A brambly hue, with fresh bramble and blackberry to the nose and palate, with hints of fresh dug earth, sooty minerality and, courtesy of 11% whole bunch, riffs of leaf and stem. Wild and brambly with a gentle but playful pick of tannins, the fruit is not ‘sweet’ but vibrant and pure in expression.  Super subtle notes of chocolate and spearmint (less flavour, more an impression of ‘coolness’) together with a certain flesh and weight to the fruit (with sweeter plum as it opens up) speak to the Barossa.  True to its Eden Valley credentials (and winemaking intent), Evangeline maintains lovely inherent freshness, without being light or austere.  Well-knit, with interest and layer. Drinking beautifully now, Hartwig reckons it will show at its best now and over the next five or six years, but could go 10 years.  Having taken away the parody (old school massive styles of Shiraz), wines are in balance in their youth –  from the beginning – he added. 14.5% RRP £21.50, Enotria & Coe

On winemaking intent, Daniel Hartwig explained that he had found the source vineyard when he was searching for Riesling.  Unsurprisingly, he added, the Shiraz was also lifted, pretty and aromatic, allowing him to show a different side of the Barossa. He uses whole bunch to open up the weave of the palate or unpack Shiraz with its “foreboding walls of fruit and tannin.”  Hartwig also emphasises the importance of keeping batches separate and discovering all the wonderful soil types…“when you take out some of the oak and artifice, it teleports you to the vineyard so clearly,” he added.

From the Barossa Valley’s Southern Grounds on friable red clay interspersed with quartz and ironstone at 260-280m.  The vines are 20 years old (clone 1654).  The bunches were de-stemmed and lightly crushed.  Following an 11-day ferment (natiral), the wine was aged in 33% new French oak hogsheads.

A deep hue, bright crimson/pink rim, with fresh red (raspberry) fruit (a classic Southern Grounds signature) with cedar.  A touch charry, graphite oak tannins are a little assertive – corseting – right now, but fine grained, so they do not impede the flow.  Rather they’re a rail of sorts.  Once again, the fruit has lovely purity, with an almost pureed character. Persistent with a clean finish, this is an elegant medium-bodied plus Barossa red which will benefit from a few years’ bottle age.  14% RRP £31, The Wine Way

Asked about the tannins, Craig Stansborough observed that they reflect a warmer year which produced smaller berries.  “I saw the structure early in those small berries, so that’s the direction you had to take if you think that the wine can handle that structure…the flavours and tannins are pretty much the same from start to finish – it doesn’t matter how much tannin there is or how soft it is, it flows.”  He personally likes to see the primary fruit taper off and reckons this will enter that phase five or six years from now.

The oak really pops out on the nose, with an almost oily, charry quality.  Pronounced mint – a foil – brings lift and follows through on the palate.  There is more than a nod to tradition here and, whilst the oak (all coffee, vanillin and charred toast) sits atop the concentrated core of cassis (and is a little strident for my taste), savoury layers of sage and sarsperilla add complexity.  Structurally, there is much to commend – velvety tannins and surprisingly persistent, fresh acidity given the generosity of flavour and warmth.  14.5%   RRP £30.00, Fine Wines Direct

Pygott reported that Peter Kelly, the winemaker, regards this cuvee as “a rubber band wine.” It stretches back a generation or two, but he is “holding onto one end and making it in a way that recognises the past, but also remains deliciously relevant for today’s market.”

From shallow rocky soils with red clay, quartz and ironstone at 480-500m in the Eden Valley.  The vines are 80-years-old, Eden Valley Old Vine Clone.  The wines were fermented with 20% whole bunch (naturally).  It was aged for 15 months in French oak (30% new) on fine lees.

I’m a fan of Alex Head’s wines.  This is no exception.  It is a bright crimson hue, with a pink rim and an uber-fresh, pure, silky ribbon of raspberry, blackberry and plum fruit.  Ripe but present, striated tannins gently cradle the fruit, accounting for its spatial but still quality.  Insinuating mineral acidity animates and defines the fruit.  Lovely presence and persistence; limbering up nicely.  14.5%  RRP £45, Amathus

Counter-intuitively, co-fermenting with Viognier deepens colour (it stabilises the red colour).  The Beauty is not the stereotypical pale type.  Far from it. This wine’s deep purple hues enrobe the glass on the swirl.  It is deep and pure fruited on the palate, loaded with fresh blackcurrant and macerated cherries and blackberry, with white blossom lift (sitting low in the creek accounts for the fragrance according to Andrew Quin, the winemaker).  Otherwise, I was out of step with the winemaker (Andrew Quin) about this wine, which still seemed a touch raw to me (perhaps because of my small sample bottle experience, which doesn’t allow time for the wine open up?)  I found it a little astringent and, with polar opposites of high alcohol (15%) and a high acid line (at 7g/l, the total acidity is uncommonly high), it needs time to come together.  And it has time.  The tannins are fine and there is no shortage of fruit to mine.  Going back to the introduction, with an early picked component which, said Quin, he’d never bottle on its own, the fruit is not only intense, it’s bright.  Neon bright. 15% RRP £38.00, Carson & Carnevale

For Quin “power is an important characteristic of Barossa shiraz – you’ve got to be doing something wrong not to have fruit or colour,” he said.  But, because of picking earlier than in the past, “modern Barossa Shiraz is also about having finesse, elegance and poise,” he observed, adding, “we work hard for that soft tannin structure.”

From the Northern Grounds in the Barossa Valley, sourced from kalimna sand over clay soils at 280-285m.  The vines are aged between 24 to 60 years-old (planted to clones 1654, BRVC12 and Heritage).  The wine was naturally fermented with zero whole bunch in 2.5t open top French oak vats, then aged in French oak puncheons for 15 months (8% new).

Intriguing orange peel to the nose, with smoky bacon/charcuterie when you lean in.  With sweet, fleshy, juicy blood plum, Black Forest Gateaux, bitter chocolate and spicy liquorice layers there is no paradox as far as the flavour spectrum goes.  It is classic Barossa.  But with balanced acidity and lingering savoury, fine-grained tannins, it is unshowy, with an elegant delivery. 14%  RRP £28, John E Fells

Pygott reported that Louisa Rose echoed Kelly’s comments.  Brian Walsh (the Chief Winemaker’s predecessor) set the standard which still informs Yalumba’s wine styles, said Rose. She believes it’s important to continue to evolve and be relevant and, for her, “tradition gives me the confidence to make wines suitable for today.”