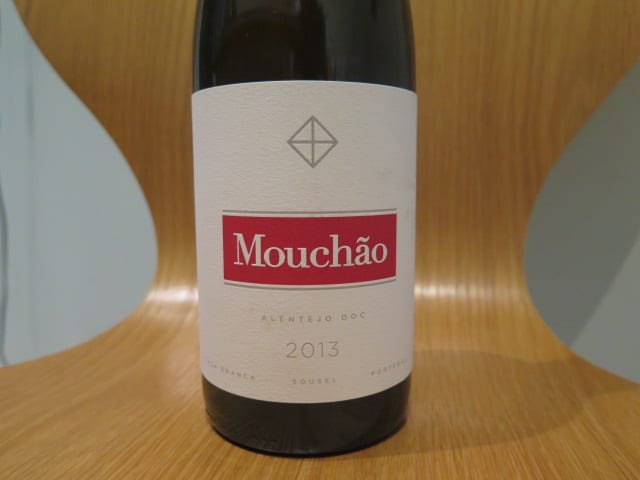 Writing up the latest 2013 release of Mouchão provides the opportunity to plug a gap in my posts and cover the 2012 vintage, which I tasted around this time last year.  Returning to 2013 which, though a tricky year, impressed, I’ve also written up Mouchão Ponte das Canas 2013 – my favourite example of this more contemporary red thus far.

You’ll find my notes on the wines below.  First, here’s a reminder of the terroir and traditional winemaking which distinguishes Mouchão – the benchmark expression of Alicante Bouschet.  Located somewhat out on a limb in the north of Alentejo in Sousel,  Alicante Bouschet and Trincadeira is sourced from the estate’s oldest Carapetos vineyard (planted 1988/field grafted in 1989), with another batch of Alicante Bouschet coming from the Dourada vineyard.  The soils are alluvial loams or Mediterranean red soils, patches of the latter over limestone.

The vineyard plots and varieties are harvested separately. All bunches are hand-picked and transported in 20 kg boxes to the winery, where they are foot-trodden in lagares and allowed to ferment (100% whole bunch) for roughly 5-7 days. The fermented wine undergoes malolactic fermentation in large wooden tonéis (5.000l vats). It is racked in mid-winter where it remains undisturbed for a further three years. Once bottled, the wine is matured for a further two to three years before being released.  Mouchão is typically a 70:30 blend of Alicante Bouschet and Trincadeira – click here for links to my notes on earlier releases.

A mild start to the year was followed by hot weather in July and August, setting the vines up nicely for harvest.  Heavy rain at the end of September would have impacted on late cycle varieties like Alicante Bouschet.  I don’t notice this in the quality of this vintage of Mouchão, however it makes for a markedly fresh, structured wine – as if wearing its seams on the outside.  Especially compared with the 2012, which I found more forward and expressive at the same stage.  I was glad to be able to taste the 2013 – a superior wine – over three days, giving it time to unfurl.   It is a deep, opaque hue, with fresh, firm acid – bilberry sharpness – and typical rounder balsamic notes to nose and attack.  Present from the get go (the attack), the tannins are initially powdery, becoming sinewy going through.   On day two, classic Mouchão signature notes of dried fig and mint with liquorice and parma violets emerge.  The fruit/acid at the core remains pomegranate/bilberry firm and bright, putting me in mind of Tonel No 3-4, which is exclusively sourced from Carapetos (and 100% Alicante Bouschet).  On day three, juicier, sweeter blackberry emerges, together with earth, eucalyptus and liquorice, very much entwined with the fruit.  Still, it remains firm.  As they say, needs food.  I polished it off with a lunchtime favourite, grilled sourdough cheddar sandwich, with onion marmalade and pickled jalapeno pepper.  Protein, with sweetness, heat and a cut of acid.  Yum.  I am sure there are more sophisticated dishes (or simple slabs of protein) to enjoy with it still, of the two, I’d recommend broaching the 2012 first whilst you wait for the 2013 to come around.  14% £38.99 at Handford Wine, £42.99 at Dorset Wine, £180/6 bottles in bond at Fine + Rare 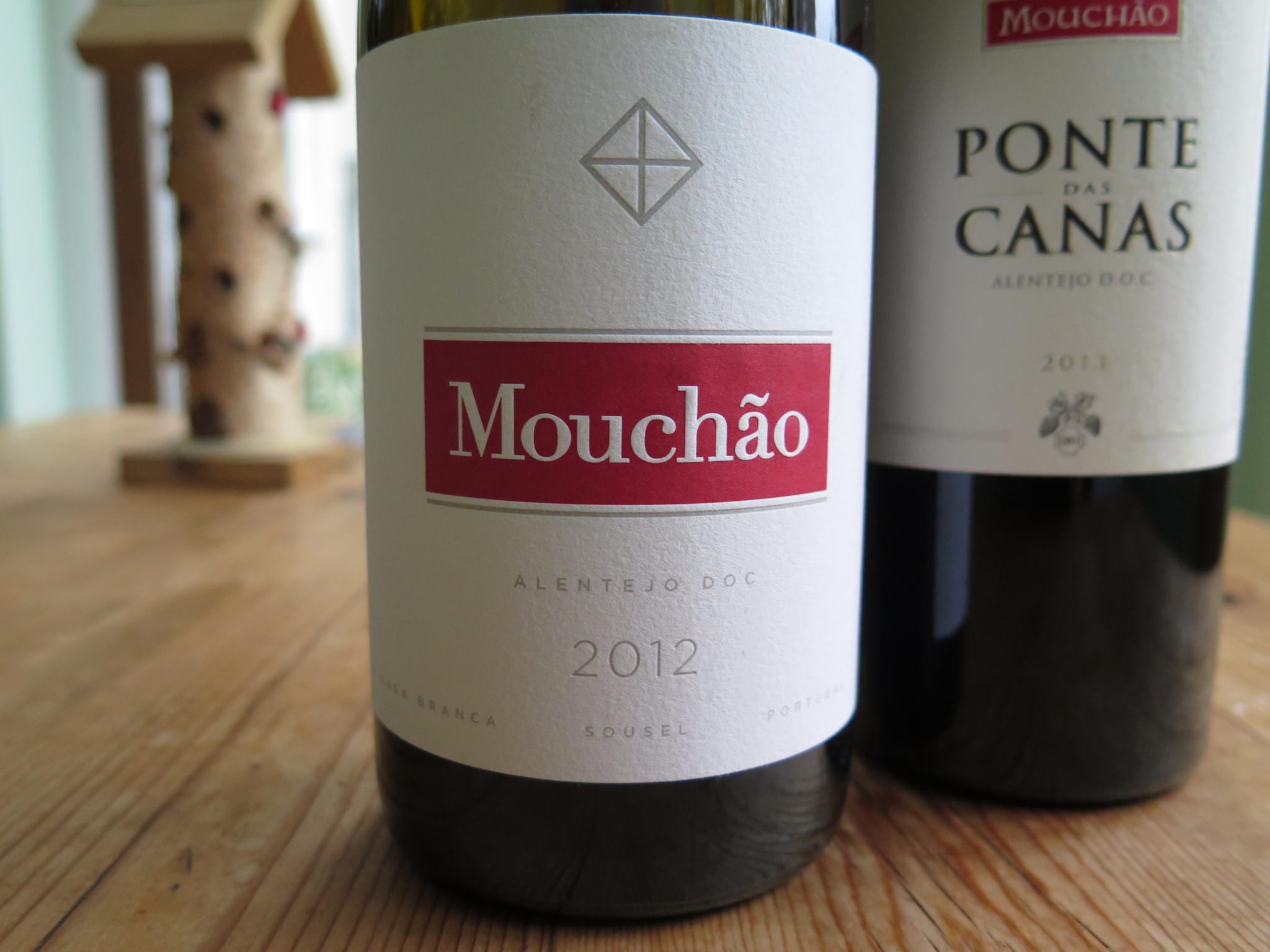 An expressive, relatively forward Mouchão with the sweetness, smoothness and fluidity I associate with this charming, if not especially concentrated, vintage. Its juicy blackberry, blackcurrant and plum fruit is supported by chalky tannins and balanced acidity.  Complexing nuances of tobacco, tar and orange peel rise in the glass.  On day two, riper blueberry, dried fig, mint tea and earthy, leafy, mulchy undertones emerge and the tannins seem grainer, more mineral.  All the hallmarks of Mouchão if not the charisma of top vintages.  On the plus side, it’s pretty approachable and delivering pleasure now. 14.5% £177/6 bottles at The Exceptional Wine Company 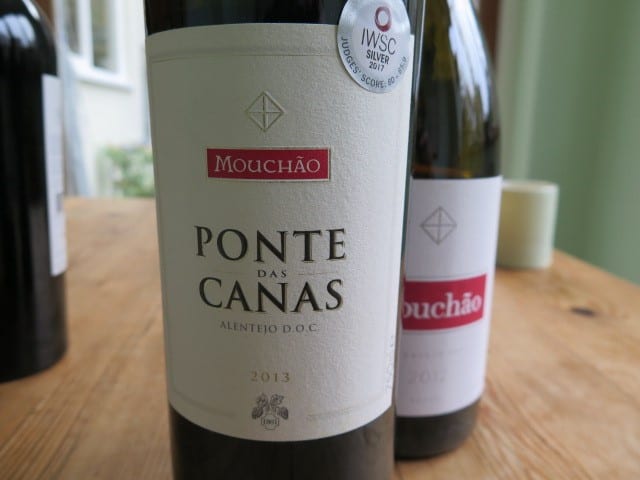 In 2013, this blend of the estate’s best Touriga Nacional, Touriga Franca and Syrah features a splash of Alicante Bouschet – “the soul” – as they say on the back label. And bless my soul, perhaps this is what gives this vintage of Ponte das Canas the edge for me.  With an Alicante Bouschet touch of  tobacco and chew and earthiness on day two, it is all the more interesting for it.   Whilst it is foot trodden in lagares old school style, it is aged (for 18-24 months) in a combination of tonies and new French oak barriques.  The French oak lends customary polish, buffing and supporting the concentrated black currant and berry fruit with grooming, fine grained tannins.  On day two, plum chimes in with the black berry and currant flavours, fleshing out the mouth-filling palate.  Leaf, parma violet and black tea notes bring detail and lift. Herdade do Mouchão Ponte das Canas 2013 is a big but arresting wine, very complete, with a long persistent finish. 14%  £24 at Caviste – a lot of wine for the money, I reckon.