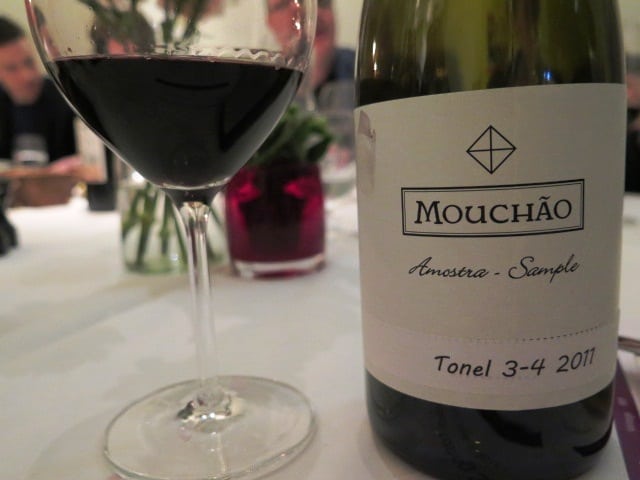 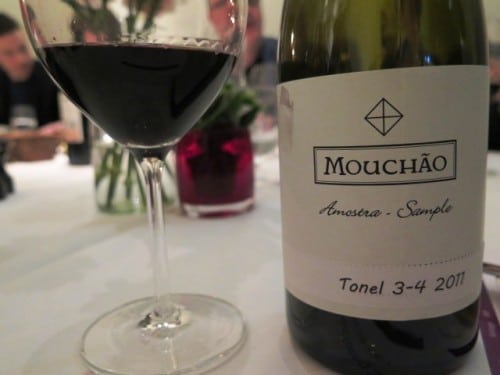 I started this week in style.  First a Langton’s Classification Masterclass with Andrew Caillard MW, followed by a freepour tasting of more iconic Australian wines (I’ll be writing up my top 40 wines for Decanter).  Then, for dinner, Mouchão all the way!  Including said sneak peek at flagship red Mouchao Tonel 3-4 2011, which is slated for release this autumn.

As regular readers will know, 2011 was a tip top vintage in Portugal from head to toe.  Herdade do Mouchão Tonel 3-4 2011 fully lived up to my high expectations of the vintage and, indeed, the high standards which the Richardson family set for it.

This 100% Alicante Bouschet cuvée first made in 1996 comes exclusively from the Sousel-based estate’s oldest vines – the Carapetos vineyard.  It was planted on the site of the original 19th century vineyard at 230m with cuttings which trace their origin back to the estate’s 19th century stock (Mouchao is said to have first introduced Alicante Bouschet to Portugal).

According to the estate’s affable director, David Ferreira (pictured below), it’s not just site specifics and vine age which dictate the exceptional quality of Tonel 3-4.  The clue is in the name.  Tonel 3 and 4 are the numbers of two  large wooden vats (toneis, the plural for tonel) in which the wine is aged for two years.  Made from Brazilian hardwood he says they have greater porosity than other barrels which lends itself to a better micro-oxygenation – no bad thing for Alicante Bouschet, which is a tannic grape. 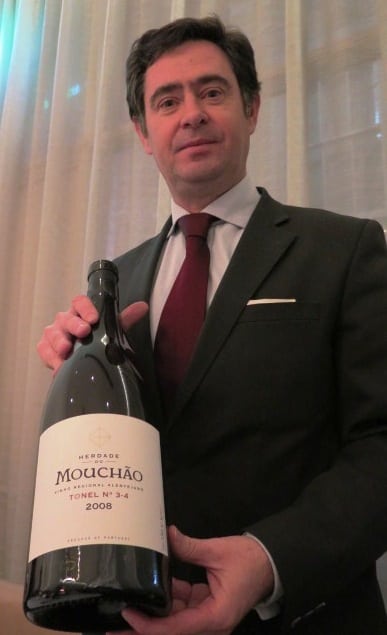 Ferreira also brought along a double magnum of Herdade do Mouchão Tonel 3-4 2008 (the current release) with which to compare the 2011. As you’d expect from a double magnum, the 2008 looked very youthful – fresh and elegant with Mouchão’s/Alicante Bouschet’s classic brooding, savoury (mulchy), well structured palate.  If it (the 2008) was intense, the 2011 was almost painfully intense – vigorous yet polished, very tight, long and persistent with so much yet to give – terrific structure and energy.  I’m looking forward to tasting it again already – preferably over a few days to allow it to open up and reveal a little more.  That said, when I tasted the 2008 on release, it remained impressively fresh and tight even on day 3 – you can read my review here, together with more background on this iconic Portuguese estate. 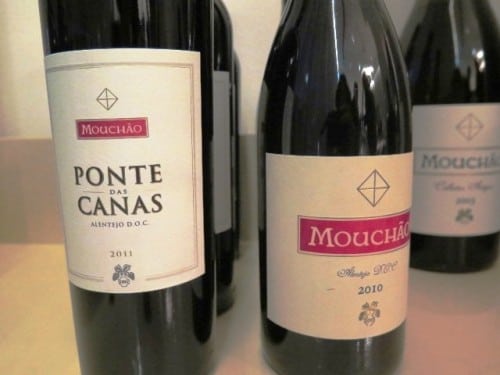 While Tonel 3-4 is not released every year (thus far in 1996, 1999, 2001, 2003, 2005, 2008 & 2011), Mouchão – an Alicante Bouschet dominant red with Trincadeira is.  For around £30, it offers plenty of characterful bang for buck.  We enjoyed it over dinner.  It’s a relatively broachable vintage, but absolutely in the house style with plenty of complexity on show already – one of my August Wines of the Month, it wowed the sommeliers and press at a tasting last summer at Taberna do Mercado (you can read my review here).

Ferreira also brought along Ponte das Canas 2011.  It’s made in a glossier, modern style and pairs non-local grapes (in this vintage Touriga Nacional, Touriga Franca and Syrah) with Alicante Bouschet.   In 2011, it’s very poised, spicy and long with fine-grained tannins; lovely structure and persistence.  And finally, Dom Rafael White 2015, (a blend of Antão Vaz, Arinto, Perrum and Fernão Pires) also made its mark more than usual.  Another strong vintage perhaps (incidentally, the earliest harvest on record with good natural acidity)?  At any rate, Dom Rafael White 2015 seemed particularly concentrated, muscular even, with ripe citrus fruit, a good backbone of acidity and complexing green notes – well judged picking here for freshness and balance.  All in all, a good night.