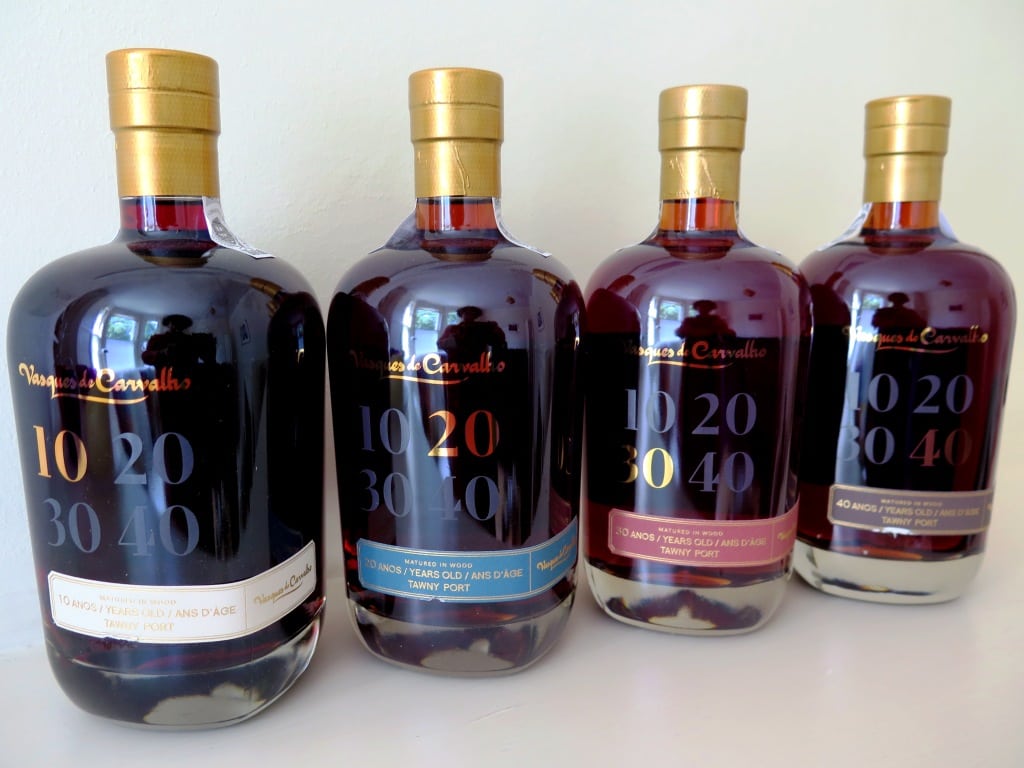 Never before has poker shared a thought bubble with Port.  Not in my head anyway.  But royal flush sprang to mind when Vasques de Carvalho revealed its opening hand – these ever so handsomely packaged 10, 20, 30 and 40 Year Old Tawny Ports.

So how did Vasques de Carvalho pull it off?  The answer lies in the partnership behind the brand.  In 2012, António Vasques de Carvalho inherited his family’s wine cellars, 6 hectares of very old (80 years old+) vines in the Baixo Corgo and about 45,000 litres of old Ports, (including a rare lot of 1880 Tawny Port set aside by António’s great grandfather, José Vasques de Carvalho).  António’s old friend Luis Vale of Kurtpace SA, a construction company, injected the capital, enabling Vasques de Carvalho (the Port House) to increase its stock to the requisite 150,000 litres.  Additionally, the pair have started re-building the winery and barrel cellar at Régua (over which António sleeps, since the cellar is located below his house).  The company has also acquired another cellar in Pinhão which already has 75,000 litres aging in small balseiros and toneis and four 40,000 litre capacity toneis.

Winemaker Jaime Costa is in charge of the portfolio.  Having worked for 16 years at Burmester, the former Revista de Vinhos Fortified Winemaker of the Year 2005 is plainly thrilled once again to have such fine and rare aged Port wines at his disposal.  And his timing is good.  The recent spate of headline grabbing, luxury-priced Very Old Tawny Ports means that Tawny Ports are, at last, having their day in the sun.

In addition to the Tawny Ports – the jewel in Vasques de Carvalho’s crown – the portfolio includes an old White Port, 2013 Vintage Port and Douro wines (Oxum, X Bardos, Velhos Bardos Reserva).  Next year the company will release a 2012 Late Bottled Vintage Port 2012, 880 bottles of 1880 Very Old Tawny Port and the first Douro DOC wine spirit, Aguardente Vinica.  Though Douro reds Oxum and X Bardos (both 2012 vintage) did not impress me, the Tawny Ports (the only Vasques de Carvalho Ports I have tasted) most certainly did, especially the 40 Year Old.  Its wonderful concentration and complexity is doubtless attributable to a judicious splash of the 1880 vintage, of which the company holds a remarkable stash – one toneis of 6,000 litres plus two casks of 400 litres (the latter presumably for next year’s Very Old Tawny release).  Costa told me that all four Tawnies are 90% sourced from the Vasques de Carvalho’s old stocks, with 10% from other wines that the company bought between 2012 and 2014.

Aged in the Douro (as opposed to in the cooler, more humid climes of Vila Nova de Gaia), I found the flavour spectrum of Vasques de Carvalho Tawnies to be rich and dark, with a touch of bake.  Yet I was intrigued by their refinement – an elegant balance, persistence (good acidity) and silky smooth spirit integration.  I asked Costa if this perhaps derived from the principal fruit source (the Baixo Corgo is relatively cool and wet).  He agreed, replying “I think [it] had a great influence, because the temperatures aren´t so high like in upper Douro for aging, and the wines gets much more acidity, that will be important during the aging and also to balance the sugar level in the wines.  That way, you get consistent tawnies, without cloying your senses while you are drinking old Ports, because as you know, many times, old tawnies, because of sugar level, could get that way.”

Here are my notes on Vasques de Carvalho’s Tawny range:

A ruddy, conker hue with rich dried plum, fig, toffeed dates and frangipane notes to the nose, which follow through on a beautifully balanced, silky palate with deep nutty resonance.  Lovely freshness to the finish – not a trace of heaviness despite the richness of the flavour profile.  A classy, concentrated 10 Year Old comprised of wines between 7 and 14 years’ old.  136g/l Residual Sugar. 20%

A deep but very bright tawny hue, quite reddish at the core, with a tawnier/yellower penumbra.  With caramelised oranges to the nose and citrusy palate, it’s still fruity and elegant with toasted almonds, apricot jam and bourbon vanilla layers. Again, very silky with cassia bark and a burnish of nutty oak to the back palate.  It is comprised of wines between 12- 25 years’ old.  138g/l Residual Sugar. 20%

Comprised of wines aged between 25 and 135 years’ old and boy does it show!  The “40 Year Old” is a deep amber core with a rim of saffron fading to olive green.  High class patisserie notes abound on a super-complex nose and palate, rich with honey, buttery, egg-yolk rich Madeleine, almond financier and denser panforte.  Subtly attenuating iodine and vinagrinho notes bring tension, pace and lift – lovely energy.  With no sign of drying out, the finish is wonderfully persistent, very nutty and very citrusy with marmalade, candied orange peel, even caramelised oranges (a testament to its freshness).  A cognac fine finish lingers for the longest time. Delicious.  144g/l Residual Sugar. 20%

This feature was first published in Blend All About Wine, the Portuguese online magazine.