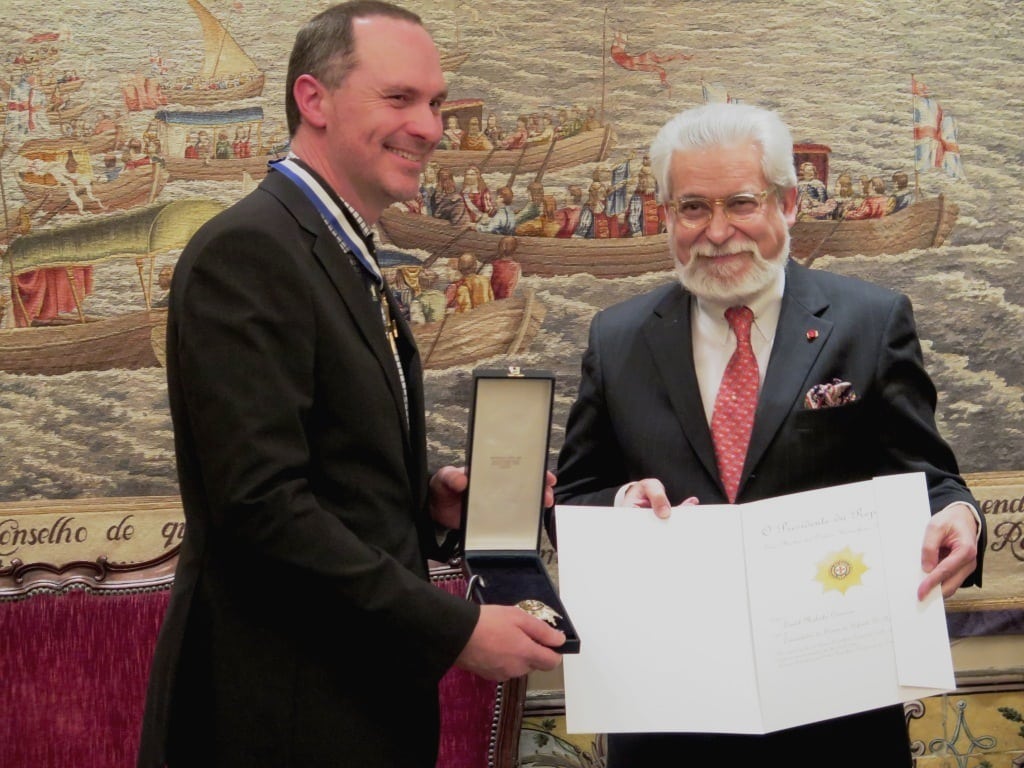 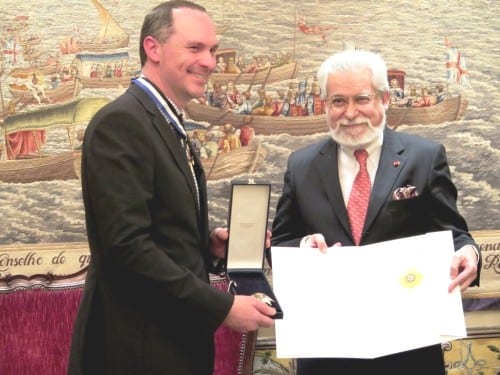 It has been a freezing start to the week in London, but there was no warmer place last night than the Portuguese Embassy.  The Ambassador of Portugal,  João de Vallera, bid a much reciprocated, fond farewell to the London wine community and bestowed the Order of “Comendador da Ordem do Infante Dom Henrique” upon Danny Cameron.  I can think of no more deserving candidate.

Cameron is a director at leading Portuguese specialist importer Raymond Reynolds, whose star dust sprinkled portfolio includes Niepoort, Luis Pato, Barbeito, Soalheiro, Quinta do Vale Meão, Quinta do Ameal Quinta do Mouro, Quinta dos Roques and the like.  He was founding President of the Association of Portuguese Wine Importers (APWI), which came up with ever so clever initiatives, since rolled out on other shores.  Take 50 Great Portuguese Wines, which granted writers the privilege of truly capturing what excited them about Portugal – much better than a sound bite. 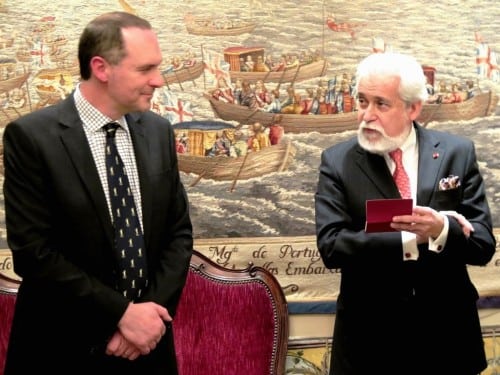 As he pithily observed,  championing Portuguese wine is hardly “the path of least resistance” but, as they say, no guts, no glory.  Cameron has wielded the metaphorical machete steadfastly and to great effect, engaging a loyal following and fresh support for premium Portuguese wines.  Both in the trade and press.  With typical generosity and integrity, he acknowledged the role of others in this endeavour, notably Raymond Reynolds and his team and fellow former APWI President, Nick Oakley (Oakley Imports).  “This is for you,” he said, on several occasions.

I asked Cameron about his journey with Portuguese wine and its future prospects.  Here are his replies.  I particularly love the from Rembrandt to Picasso analogy!

You studied Hotel & Restaurant Management.  What tempted you to focus on wine and how and when did the interest in Portuguese wines come about?

I loved cooking, and hankered a bit for a life in the kitchen, but realised that I was never going to be good enough to reach the top as a chef. But flavours and tastes turned out to be just as interesting in wine.

Since joining Raymond Reynolds in 1998, what has sustained your interest and energetic commitment to Portuguese wines?

The country is endlessly fascinating. I remember the first time I looked at Portugal’s wines seriously, it was like having spent 10 years looking at Rembrandt, to walk into a room full of Picasso. My head thinks in colours, and Portugal was like a whole new palette (or indeed palate) of them.

Let’s pretend you had a crystal ball back in 1998 – what future did you see for Portuguese wines in the UK?

I thought it would be impossible for the world to ignore. I wasn’t completely right about that, at least not in the time I expected, but attitudes are now certainly changing in Portugal’s favour.

How has Raymond Reynolds’ list (and clientele) evolved since then and what has influenced this evolution?

We’ve found ourselves peeking into corners of Portugal we didn’t previously work in, like Beira Interior and Algarve. This is really due to the progression on specific producers in those regions, who have really helped to move the regions on as a whole.

Where do you see potential for future growth?

I’d guess that there is much more to do in the on trade. It’s a real opportunity for Portugal, especially in wine flights, and other by the glass offerings.

Has the success or lack of success of any Portuguese regions surprised you and, if so which and why?

Dry whites have always been strong for us, and the quality is just going up and up. So, for that, I’m no longer surprised! I guess in the last handful of years, the re-emergence of Dao and Bairrada has been great to see how their regionality is getting people excited again. There were people who seemed ready to consign these regions to the history books, but there is uniqueness in both regions which is just too exciting to stay hidden.

How important are collaborative initiatives like the Douro Boys, the New Douro Tasting, Baga Friends and regional (CVR) tastings in terms of bringing impetus to profile and sales?

Initiatives such as Douro Boys and Baga Friends I think are very important in shining lights on regionality, and this helps the country as a whole.

What do you look for in a wine and a producer and, leaving aside wine quality, what qualities are important to success in the UK?

We are a very small, but very critical and analytical team, and we have to look at more than just what is in the bottle on the day, although its where we start. We also consider authenticity (to the region), sustainability (to the environment), and a whole bag of other stuff.

What three prices of advice would you give to a Portuguese producer keen to try their luck in the UK?

Come to the market, understand the global nature of UK wine sales, and recognise that in the UK, Portugal is not a special case, such as it is in some ex colonial markets, for example. Oh, and don’t expect immediate results.

Strengths include the uniqueness of regionality and grape varieties, but weaknesses include a lack of recognition of either.

These days, native and obscure varieties are on trend.  Has Portugal capitalised on this trend or have “new” more obscure countries/regions/varieties stolen a march on it?

There is sometimes a wee bit too much desire for novelty for its own sake. It’s possible that that has led Portugal to be bypassed a bit by those consumers, but Portugal may be better focusing its efforts with a demographic which will retain loyalty, rather than jump onto the next passing bandwagon.

Let’s pretend your Order of “Comendador da Ordem do Infante Dom Henrique” grants you special powers to see into the future.  What does the future for Portuguese wines look like?

Pretty good. Wines are getting better, in the sense that entry level wines are prettier, and higher up the scale we see many winemakers seeking more freshness and less oak. The world doesn’t need more fruit bombs or battering rams, so we see a side of Portugal emerging as quite a hip place to buy unique, low intervention wines, once above the base line.

Which Portuguese wines/producers/regions would you most like to see (do see, even) in your own, personal cellar?

Anything which tastes utterly of where it comes from, ideally with more elegance beans than power beans.

When you are not drinking Portuguese wine, what’s in the glass?

A bit self indulgent this (so thank you for asking). Cabernet Franc and Sauvignon Blanc from the Loire, most especially when they don’t taste of the variety, but where they actually come from. Good fino sherry. Riesling from Rheingau and Mosel. Top tier English sparkling, and once we have completed our own foraging and distilling project, my brother and I’s Pollination Gin.